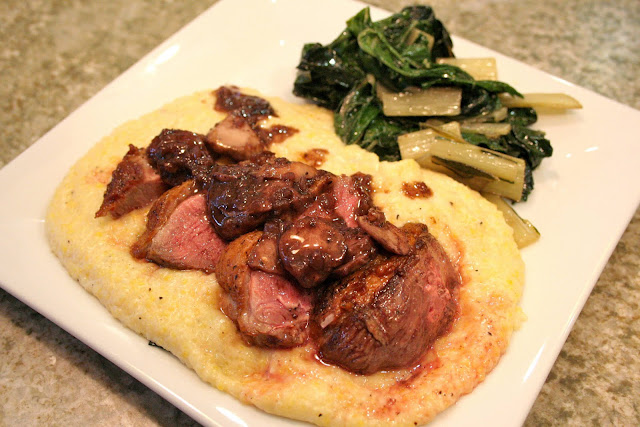 Well, we have been busy lately, as evidenced by the lack of activity on our blog. Michael started a new job not long ago, and I started my summer teaching, and my dad came to visit, and our friends had a baby, and my brother came to visit, and we did fun things like going strawberry picking at Swanton Berry Farm. We have certainly been doing plenty of cooking and eating, just not as much writing. And we have made an exciting culinary discovery - we can cook duck! In fact, it's pretty easy! It's one of those things that we love to order in restaurants but for some reason had never tried ourselves. The key to getting a nicely cooked duck with crispy flavorful skin is to sear it in a pan first, then finish it off in the oven. And a big plus, if you're into that sort of thing, is that you render out the fat in the pan so you're left with some duck fat for future cooking - we've now made duck three times so we're accumulating a good amount and not sure yet what to make with it. Ideas?


Crispy Roast Duck Breast (serves 2)
- 1 duck breast (about 2/3 lb)
- 1 tsp chopped shallot
- 1 small porcini mushroom, thinly sliced
- 1/4 cup red wine
- 1 tbsp stock (vegetable, chicken, or beef)
- Salt and pepper to taste
- 1 tsp butter
Preheat the oven to 400 degrees. To start, pat the breast dry with paper towel, then use a sharp knife to score the duck skin by making small cuts in it (this will let the fat under the skin escape while it's cooking). Rub some salt and pepper on both sides of the breast.
Heat a small amount of vegetable oil (about a tsp) in a cast-iron skillet (if you have one - otherwise another oven-safe skillet will get the job done, though something non-non-stick would be best at browning the skin) over medium high heat, then put the duck in the pan, skin side down, though not before the pan is sufficiently pre-heated. Cook for six minutes, or until the skin is well browned. Carefully drain as much of the fat from the skillet as you can (you may have to take the duck out or have someone else hold it in place with tongs). 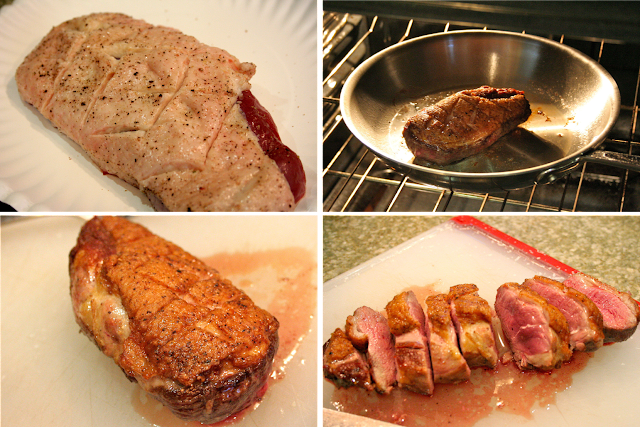 Flip the breast to skin side up in the skillet, then transfer to the oven and cook for six minutes for medium rare - slightly more if you like your duck more on the medium side.
Remove the skillet from the oven and transfer the duck to a cutting board. Meanwhile, put the skillet back on the stove and turn on the heat to medium high. Add the shallot and the mushrooms and let them cook for a minute, then add the wine and stock. Bring up the heat to medium high and let the sauce boil until it has reduced and thickened. Stir in the butter, salt, and pepper.
Slice the duck, top with the sauce, and serve! We like ours with creamy polenta and oven roasted chard. 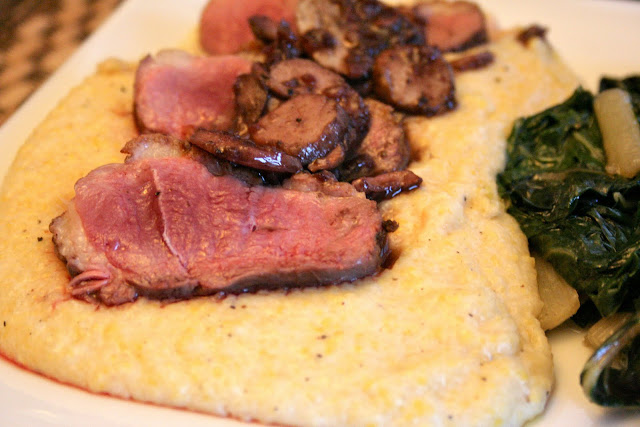