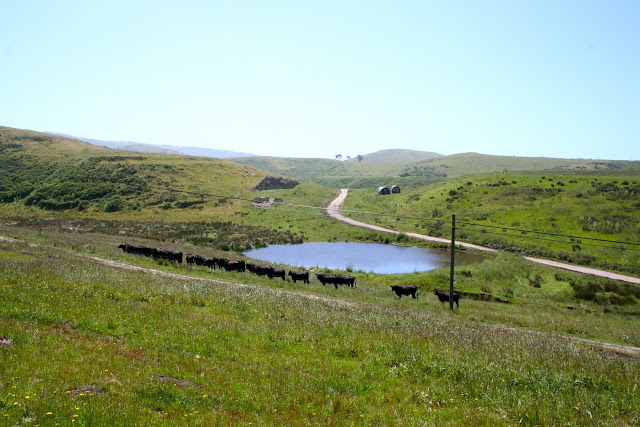 On  June 15, we took a very interesting (and free!) tour of Marin Sun Farms in Point Reyes. This is something that we had wanted to do for a while, since, like many other people who have read books like The Omnivore's Dilemma and seen movies like Fast Food Nation, we are trying to be more aware of where our food comes from, and to make responsible choices about what we buy and eat. We've found this to be fairly straightforward when it comes to produce; we are fortunate to live in an area where a lot of fruits and vegetables are grown, and we try to stick with what is in season and has not traveled too far to make its way to us. Things get a little trickier with meat, though; we can buy things that are labeled "organic" or "grass-fed" or "free-range," but it's hard to say what that really means when it comes to the lives of the animals involved.

I was a vegetarian for a time in high school and college, and I remember exactly the moment when I made the decision to do so. My mom had made roast beef for dinner, and she was cleaning up the pan; I took a look at the juices in the bottom of the pan and thought about how it was blood. That might have been the first moment when I started to think about what it really meant to eat an animal, and I decided to opt out for a while. I slowly returned to eating meat with things that didn't look much like animals: breaded chicken breast, for example. Recently Michael had started pondering the meat part of our diet, and said that logically and morally he felt that he shouldn't eat meat if he wasn't capable of killing the animal himself.

In the end, we decided neither to give up meat nor to take up hunting, but to make a greater effort to know what we're getting when we buy meat. To us, it seems that eating meat is a natural part of the ecosystem. Energy comes from the sun; some life forms (plants) are able to use that energy directly. Other life forms eat the plants to get that energy, and still other life forms eat the life forms that eat the plants. And we, being omnivores, eat a little bit of everything. There is a certain brutality to killing and eating an animal, but in the end is it any worse than eating a plant? Maybe only in that we are more closely related to animals, so we can empathize with them, and we have a strong tendency to feel the suffering and pain of other living things (some of us more than others). The real problem for us comes in when animals are grown on enormous farms where they are not really part of the ecosystem, and don't have a normal life cycle; they are raised in miserable and unnatural conditions in which they can barely move and are constantly in pain and terrified. We don't want to be a part of that. So our trip to Marin Sun Farms was an effort to see if it was possible to raise animals for meat in a way that is more humane, more natural, and that we could feel comfortable with when we choose to have meat for dinner.

Marin Sun Farms is owned by David Evans, who along with the farm manager Jerome gave us the tour. They raise cattle and chickens on the main farm that we visited, and lamb and goat on other facilities. We learned a lot in our two hour tour, but we really just scratched the surface of gaining an understanding of the complexity of farming. One of the most important points that we took from this tour is that farming is very complex and for every decision that might seem simple, there are many factors that need to be considered. 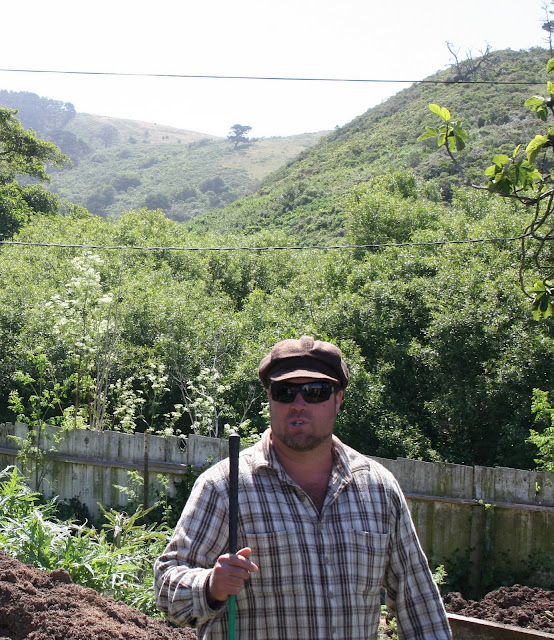 First we visited the chickens, which are kept in large coops. There are two separate types of chicken on the farm, one type for eating and another type for eggs. The eating chickens are apparently not as hardy as the egg laying chickens, so it not always feasible to keep them outside. They spend most of their time in the coops, but they seemed to have enough space to move around. 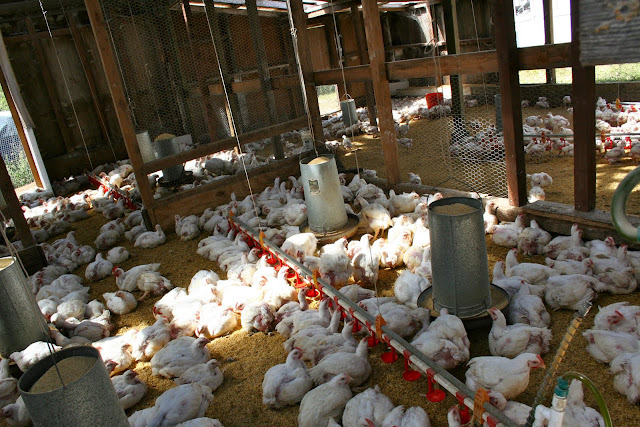 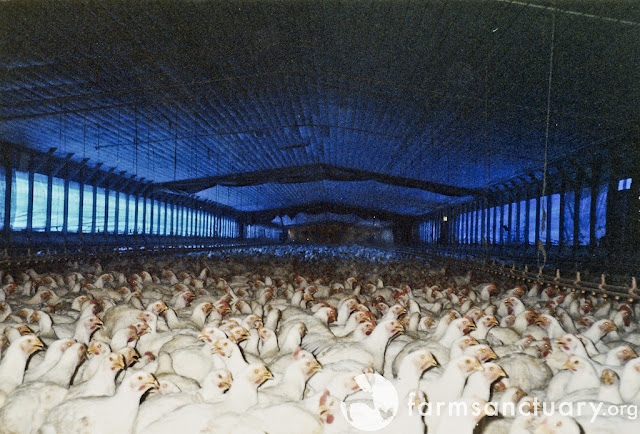 (Top: Marin Sun Farms' coop. Bottom: conventional farm coop, photo: farmsanctuary.org)
The chickens eat corn and soy meal, and though Jerome told us that they would like to move away from soy, it has the best balance of nutrients. Changing the feed from soy would require adding a lot of other ingredients to get equal nutrition for the chickens, and that would quickly get more expensive (and these chickens are already not cheap).

After seeing the big chickens, we got to visit with the chicks, which come in from another farm when they have just hatched, and spend a couple of weeks in a special heated coop. We asked why they didn't hatch their own chicks, and Jerome said that they would like to and may at some future time but, again, there are limiting factors, such as cost, space, and federal regulations about what land is used for. The tiniest chicks (which we got to hold) were three days old; we also visited with some slightly older chicks. They get ugly pretty fast - the little fuzzy yellow creatures that we held were already much less attractive at a week old! 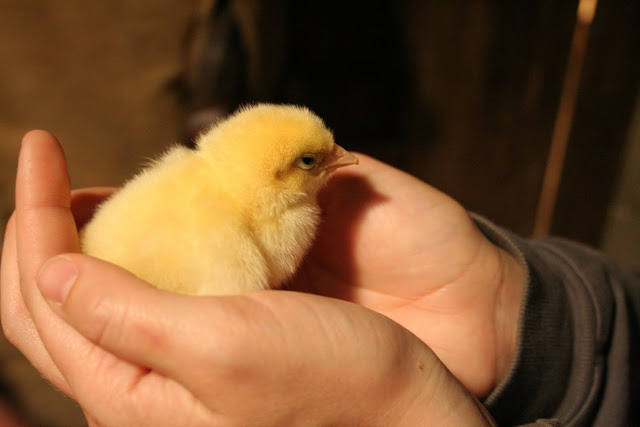 Next we took a little hike across the farm, which is set in a spectacular landscape of rolling green hills overlooking the ocean. The laying hens are pastured outside in moveable pens so that they can feed on bugs and seeds, and simultaneously fertilize the grass. David pointed out where the chickens had been over the past few days - areas of bright green grass, clearly visible from where we were standing, one hillside over. Both David and Jerome talked enthusiastically throughout the tour about ideas they have and things they would like to change: getting some oxen to pull the chicken coops instead of using a tractor; having a couple of pigs to eat scraps. It was nice to hear two people who are clearly so knowledgeable and passionate about what they do, and to hear how they are constantly striving for innovation in their farming. We found it interesting to think about what "innovation" means when it comes to farming - moving away from technology and back to what seems to be simpler (in that it doesn't involve machinery) but is actually more complex (in that it involves making use of natural cycles and having a good understanding of ecology and the systematic interaction of different animals and plants). 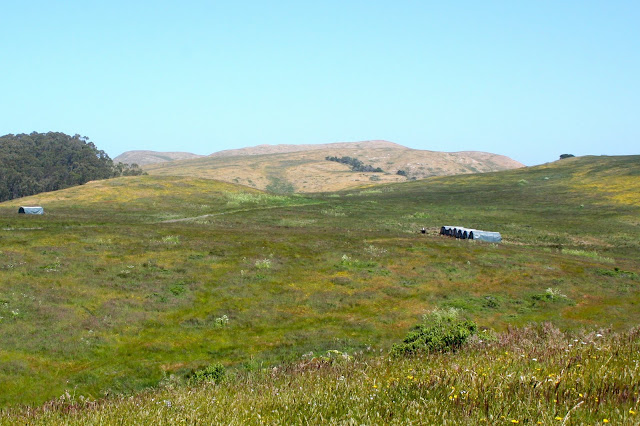 Next we visited the cattle, which come in a variety of breeds but mostly angus (which are black and have no horns). The cattle here are slaughtered at 28 months, just over two years and about three times the age of your standard big farm cattle. Because they are grass fed, it takes them longer to grow, but they also get a tastier,  more complex flavor. David explained that ideally for the farmer (and for the farms and the land), meat would be seasonal, since February and March are the most difficult seasons for meat. Since the cattle feed on grass, and grass is least abundant in those months, the cattle are much slimmer and not ideal for slaughter. However, American consumers demand meat year round, and if one farm decided to offer meat seasonally only, they would not be able to compete with other farms offering year-round meat; they would lose their spot in butcher shops and counters at supermarkets and so it is simply not a viable option at this point (here's a short article on the topic by Bill Niman and Nicolette Hahn Niman). 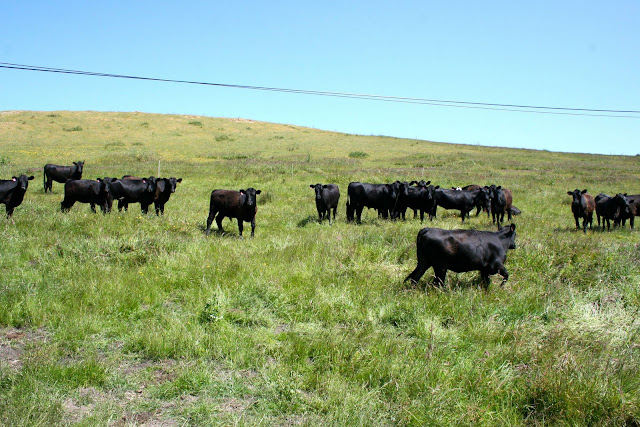 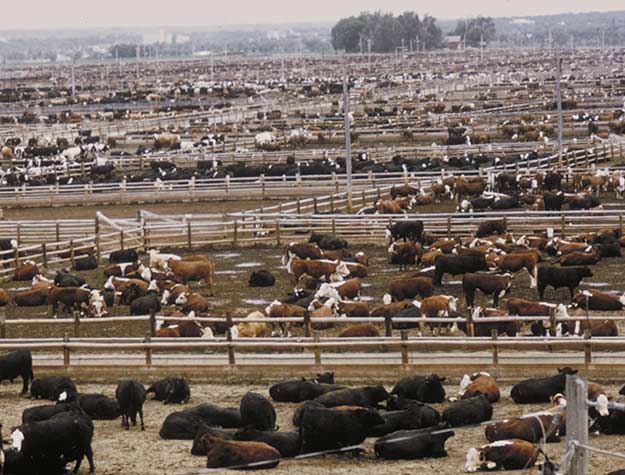 (Top: Marin Sun Farms. Bottom: conventional farm, photo: http://fischersfoodandfitness.blogspot.com/)
Another limiting factor on small, local farms is the need for a slaughterhouse. To meet USDA regulations (and also just to ensure safety for the consumer), commercial meat must be killed in a slaughterhouse, but there is only one here in the Bay Area, in Petaluma. We asked why, and he explained that very few people want to get in on the slaughterhouse business. Most of the people in it are old, and no one is jumping at the opportunity to take their place. Aside from health and safety regulations, it's simply not practical for a farm to do their own slaughter, even for smaller animals like chickens. David told us that at Marin Sun Farms, they used to slaughter their own chickens (regulations allow for a limited number of chickens to be slaughtered on facility), but it was so labor intensive for such a small result, and the chickens, once killed, would only be good to eat for three days, which is much less time than if they were slaughtered in a better facility. You can read more about the slaughterhouse shortage in this article in the New York Times.

At the end of our tour, David wanted us to see the process of loading the cattle into a truck for the slaughterhouse, and we happened to be there at the right time. He explained that they do everything they can to keep the process from being overly traumatic for the animals. They transport the cattle by truck a couple of times in their lifetime so that the process is familiar to them, and they take about 20 cattle at a time. One person (in this case David) goes into the cattle pen, picks out a few animals, and herds them into a separate enclosure, then into the truck. While the cattle didn't seem terribly happy, and a few balked or tried to turn away, overall the process was pretty smooth. 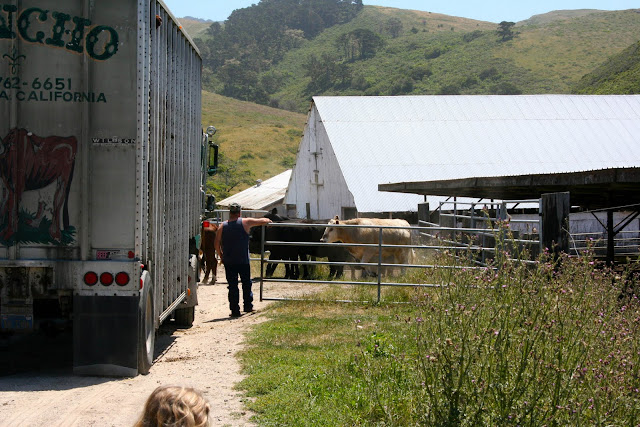 Finally, we visited the Marin Sun Farms butcher shop back in Point Reyes Station, where we ate delicious hamburgers for lunch. In a sense it was a little strange to eat the animals that we had just visited, but in another way it was quite logical, and a fitting end to our tour. After visiting Marin Sun Farms, we felt good about eating the meat that they produce, and we also felt that we could understand and appreciate why it is so expensive (our burgers were $12, and the filet mignon offered at the butcher shop was $31 a pound, though it is available for slightly less elsewhere).

Here's the thing: meat shouldn't be cheap. It is expensive to produce, especially in a way that is sustainable and humane. At Marin Sun Farms, we saw animals being treated with care and respect, and we saw farmers who clearly really care about what they are doing and are constantly striving to find a better way to do it. We are hoping to find more farms doing the same thing, and to continue to visit farms to see first-hand where our meat comes from. 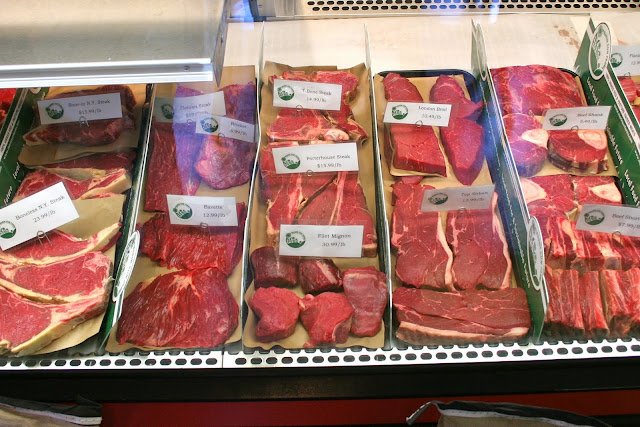 Marin Sun Farms offers free tours a few times in the spring and summer. If you live in the Bay Area, you can buy their meats at their own butcher shop in the Market Hall in Rockridge, or through various retailers in San Francisco and the East and North Bay (including Berkeley Bowl, Bi-Rite market, and Star Meats). 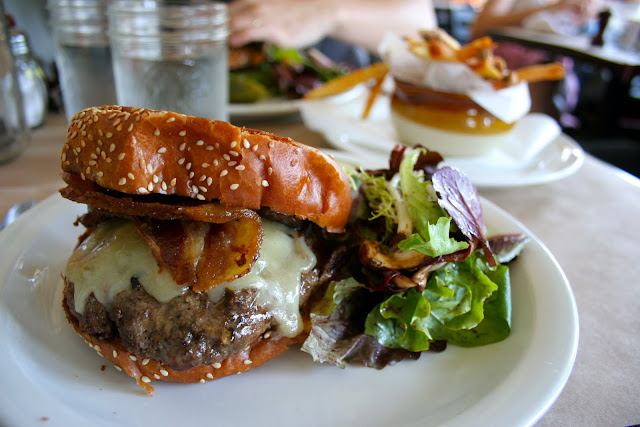 at 11:44 AM
Labels: agriculture, beef, farm, local, sustainable
Email ThisBlogThis!Share to TwitterShare to FacebookShare to Pinterest