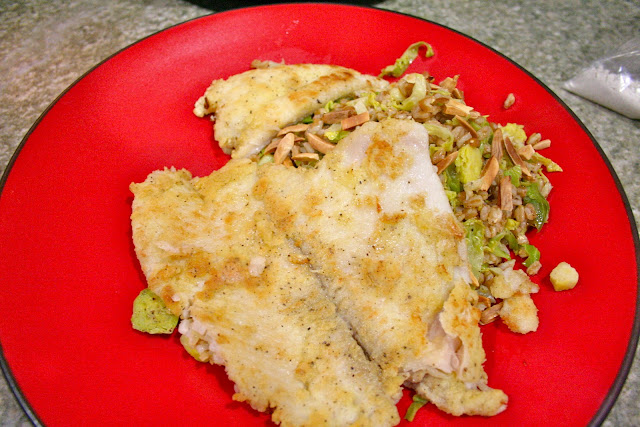 We may claim to be omnivorous, but the truth is that we don't eat a whole lot of seafood. In fact, both of us refused to eat any of it for most of our childhoods (with the exception of canned tuna, which really seems as though it should not be classified as seafood). But we discovered something about sole (and other whitefish): it doesn't taste like fish. In fact, it doesn't taste like much of anything. It's really more of a textural thing - and it makes a nice base for other delicious flavors. We coated this fish in flour, sauteed it lightly, and covered it with a lemony winey shalloty sauce, all served over farro with brussel sprouts and toasted almonds.

If you don't like fish, you might just like this one. If you don't like brussel sprouts, on the other hand, this might not be the dish for you.
Warm Farro and Brussel Sprout Salad (serves 2)
- 1/3 cup farro
- (just under) 2/3 cup vegetable stock
- 1 clove garlic, finely chopped
- 1/2 lb brussel sprouts
- Dash of lemon juice
- Salt and pepper
- 1/4 cup slivered toasted almonds
Farro is a little tricky - we've found that using a 2:1 ratio of liquid to farro is just a little bit more liquid than we need, so we do just a smidge under (fill the second third of a cup not quite to the top). Put the farro and stock in a small saucepan and bring the mixture to a boil. When it's boiling, turn the heat down to low and cover. Let simmer until the farro is tender (about 40 minutes).
Slice off the stems of the brussel sprouts and remove any wilted or dirty looking outer leaves. Slice the brussel sprouts parallel to the stem, making narrow rounds. These will breakdown into confetti-like strips when boiled.
Bring a pot of water to boil and blanch the brussel sprouts by cooking them for 4-5 minutes. Drain them.
Heat some oil in a skillet over medium heat and add the garlic. When the garlic has just started to soften, add the brussel sprouts and cook until they are tender, about 5 minutes. Stir the brussel sprouts into the cooked farro, and season with the salt, pepper, and lemon juice. Stir in the almonds, then keep everything warm in a pot - the fish and sauce are quick so you can make them after you finish the salad. 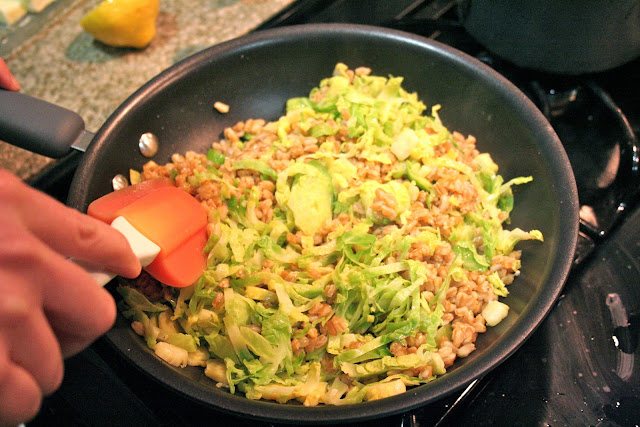 Sauteed sole (serves 2)
- 1/2 - 2/3 lb petrale sole (or similar white fish)
- 1 egg, beaten
- 1/2 cup flour
- Salt and pepper
- Oil, for cooking
Put the flour, salt, and pepper into a large plastic bag. Dredge the fish in the egg, then transfer the pieces to the bag with the flour. Shake it around until the fish is covered with flour. 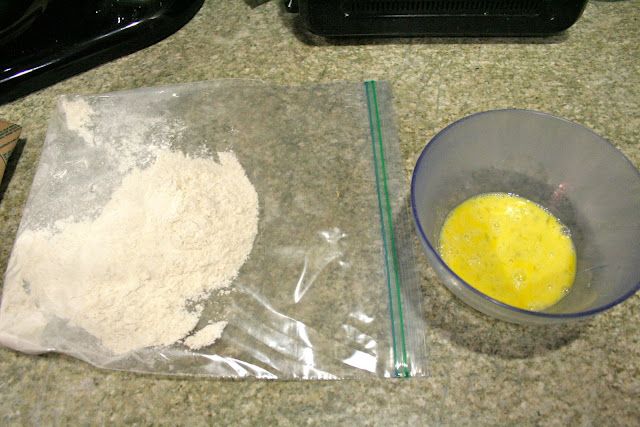 Heat some oil over medium high heat in a large skillet and, when it is hot, add the fish. Cook until each side is golden brown.
Serve the fish over the salad and spoon the sauce (recipe below) on top.
Lemon Shallot Sauce
- Oil, for cooking
- 2 tbsp chopped shallot
- Juice of 1 lemon
- 2 tbsp white wine
- 1 tbsp butter
- Salt and pepper
Heat the oil in a small saucepan over medium heat and cook the shallot until it is soft and fragrant. Add the lemon juice and white wine and then the heat up to medium high. Let the sauce boil and reduce for 3-4 minutes, then stir in the butter, salt, and pepper. 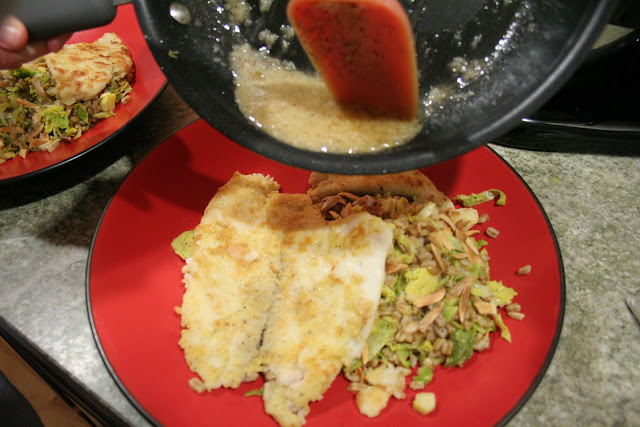 at 10:35 AM
Labels: brussel sprouts, farro, fish
Email ThisBlogThis!Share to TwitterShare to FacebookShare to Pinterest