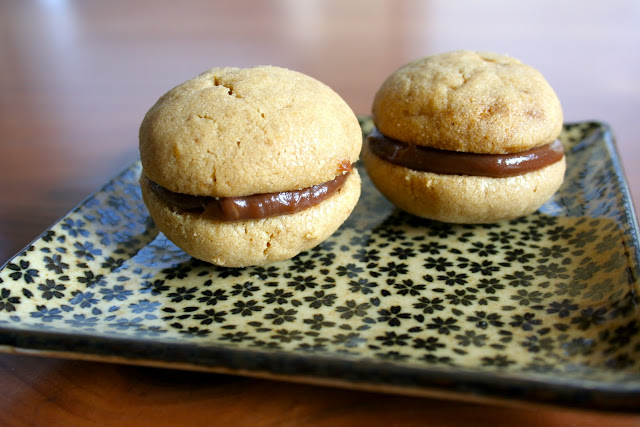 When I lived in Brazil, a friend asked me about an amazing and wonderful American thing that she had heard about. It was called pasta de amendoim, and she had seen it in movies, and it looked sooo delicious, and she desperately wanted to try it.
And I had no idea what she was talking about. Those words in Portuguese didn't mean anything to me, but it sounded to me like it should be almond paste. Almond paste doesn't sound very appealing, and there is certainly no such famous American delicacy.
I'm sure you figured it out much more quickly than I did. Yes, pasta de amendoim is peanut butter, and the movie she had seen it in was Meet Joe Black, in which Death comes to earth in the form of Brad Pitt in order to learn about the wonders of life on earth - and one of those wonders is, you guessed it, peanut butter.
Death/Brad Pitt and my Brazilian friend missed out on one crucial detail, however - peanut butter is a wonderful thing, but not as wonderful as peanut butter and chocolate together. This was the first recipe that Michael and I made from The Craft of Baking, and it did not disappoint. We tweaked some of the ingredients and instructions, but the main thing that we found was that the filling as written made at least twice as much as we needed for the cookies that we had, so we cut it in half here. However, having a little bit extra peanut butter/chocolate/cream around is certainly not a terrible thing, and in fact we see a bright future for ours on some ice cream, or maybe some brownies, so go ahead and make the whole thing if you feel like it.
Oh, and the cookies manage to keep their shape pretty well, but you might have a couple that come out slightly flat on one side or not perfectly round. Those cookies, which are clearly not destined to become beautiful little round sandwiches, need to be taken care of right away. I know you know what I mean. I know you will do the right thing.
Cookies (makes about 48 - enough for 24 sandwiches)
Adapted from Karen DeMasco, The Craft of Baking


1 and 3/4 cups flour
1 tsp baking powder
1/2 tsp baking soda
1/2 tsp salt
6 tbsp butter, softened
1/2 cup dark brown sugar
1/2 cup powdered sugar
1/2 cup creamy peanut butter
1/2 cup vegetable oil
1 and 1/2 tsp vanilla extract
1 large egg
Sift the flour, baking powder, baking soda, and salt together in a large bowl, and mix together.
Beat the butter, brown sugar, and powdered sugar together until the mixture is light and fluffy. Add the peanut butter and mix well, making sure to scrape down the sides of the bowl so that everything is combined. With the mixture on low speed, slowly add oil, vanilla, and egg, and beat until mixed.
Stir in the flour mixture and beat until just combined. Refrigerate the dough for at least an hour so that it stiffens up.
Preheat the oven to 350 degrees and line two baking sheets with parchment paper. Have a small bowl of flour ready to flour your hands to keep them from sticking to the dough. Dust your hands with flour, then take about a heaping tablespoonful of dough and roll it into a ball of about 1 inch in diameter. Keep making balls like this, placing them about two inches apart on the baking sheet, until you've used all the dough. 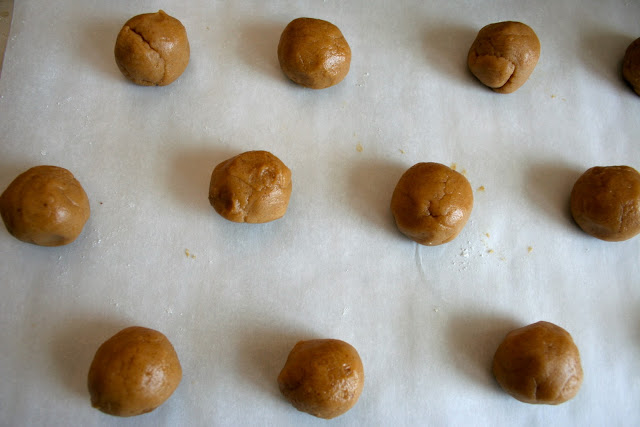 Bake for 12 - 15 minutes, or until the tops of the cookies have cracked. Let them cook on the baking sheets for about 3 minutes, then transfer them to wire racks and let them cool completely before filling them. 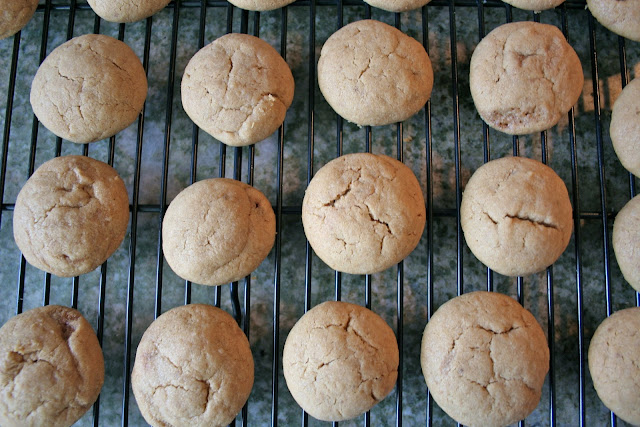 Filling (enough to fill 24 sandwiches)
Adapted from Karen DeMasco, The Craft of Baking
- 1/2 cup (about 3 oz) milk chocolate chips, or chopped milk chocolate
- 1/4 cup creamy peanut butter
- 1/4 tsp salt
- 1/3 cup heavy cream
Put the milk chocolate, peanut butter, and salt in a large bowl (use a bowl larger than you think you need so that you have plenty of room to stir). Put the heavy cream in a small saucepan and bring it to a boil, then pour it over the chocolate and peanut butter. Use a whisk to stir it all together until all the chocolate has melted and the mixture is smooth and well mixed. Refrigerate until it has cooled and thickened to a spreading consistency (about the thickness of a buttercream frosting).
To make the sandwiches, use a small knife or spatula to spread the filling on the flat side of a cookie, then put another cookie on top. 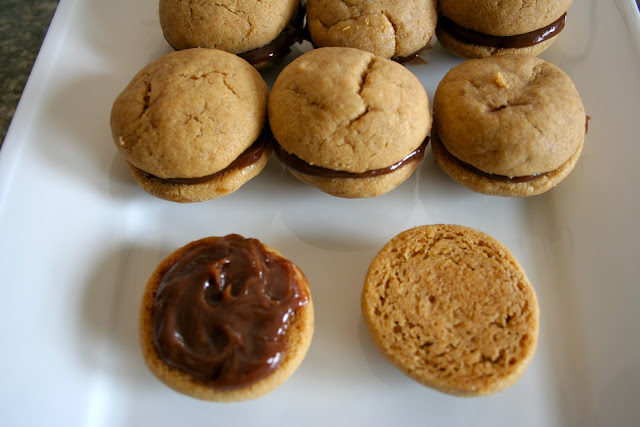