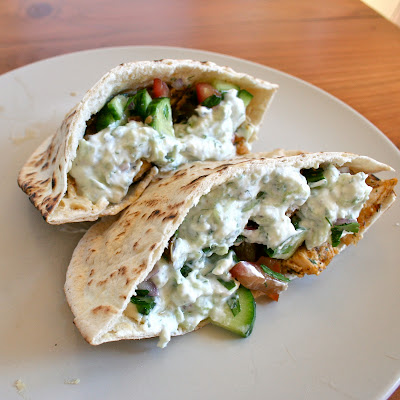 It was supposed to snow in the Bay Area last week. There was a big hullabaloo. It was in all the newspapers, and there was even a website where you could get a minute by minute up date.
It didn't snow. Well, they're saying it did, but that was only a few flakes falling on the highest hills in the city and the north bay. No snow at sea level. But, it was cold, and rainy, for quite some time. This got us dreaming about warmer climates. Did you know that the Canary Islands have near perfect weather? It seems to be constantly between 60 and 70 degrees. Maybe we'll move there.
In the meantime, we have to satisfy ourselves with foods that make us think of warmer climates. Soups and stews and warm comfort foods are great, of course, but instead of making foods that accompany the weather, we wanted to make foods to defy the weather. We wanted warm, sunny Mediterranean foods. So we set about perfecting our chicken gyros, with creamy tzatziki sauce, hummus, and a Mediterranean salad. In the past, the weakest link has been our chicken, so we took a new approach - instead of just cooking some boneless, skinless breast in a pan, we took a bone-in, skin-on breast, browned it, roasted it with tons of flavors, then took it off the bone and back into the pan to give it a final browning. The results were very tasty, and definitely cold weather defying.
Chicken Gyros (serves 2)
- 1 chicken breast (about 1 lb), bone in and skin on
- Oil, for cooking
- 2/3 of a small red onion, chopped (you'll use the rest in the Mediterranean salad)
- 1 clove garlic, chopped
- 1 tbsp fresh parsley, chopped
- 1 and 1/2 tsp dried oregano
- 1 and 1/2 tsp hot paprika
- 1 and 1/2 tsp za'atar
- 1/2 tsp cumin
- 1 tsp onion powder
- 1/4 tsp cayenne pepper
- Salt and pepper to taste
- 1 and 1/2 cups stock (your preference - we used veggie)
- Pita bread (make your own or buy it)
- Hummus (we bought ours)
- Tzatziki sauce (recipe below)
- Mediterranean salad (recipe below)
Preheat the oven to 375 degrees. Pat the chicken dry and sprinkle some salt and pepper on both sides. Heat some oil in a large oven-proof pot and saute the onion and garlic over medium heat until soft (just a couple of minutes). Add the chicken and lightly brown both sides.
Add in 1 tsp of the paprika, 1 tsp of the za'atar, 1 tsp of the oregano, the cumin, the cayenne, and the onion powder. Mix the spices in to coat the chicken, then pour the stock over it. Bring the mixture to a boil, then cover and transfer to the oven. Cook for 45 minutes.
Remove the pot from the oven and take the chicken out of the pot; transfer it to a cutting board, pull the meat off the bone (it should come off very easily) and roughly chop it into bite-sized pieces (1/2 to 1 inch). Strain the liquid from the pot, discarding the liquid and keeping the garlic and onion bits. 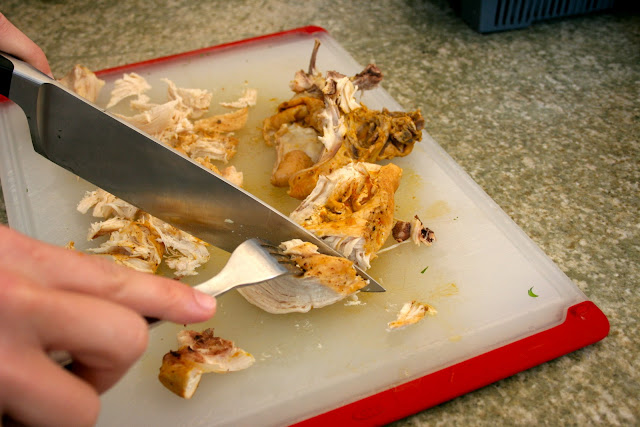 In a medium skillet, heat some oil over high heat. When it is hot, add the chicken, the garlic and onion from the stock mixture, and the remaining 1/2 tsp each of za'atar, hot paprika, and oregano. Season with salt and pepper to taste. Cook the chicken, stirring frequently, until it is nicely browned. 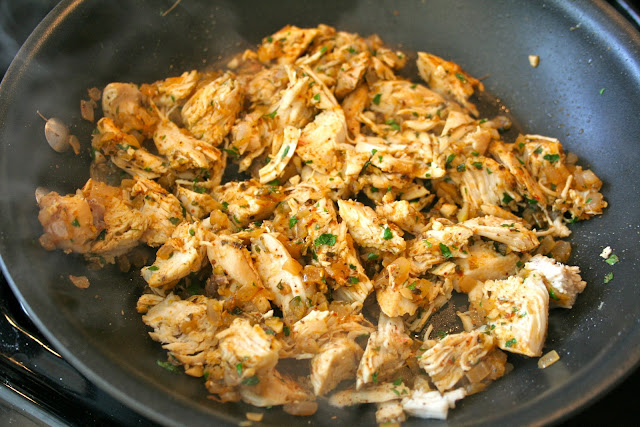 Serve in a warm pita with tzatziki sauce, hummus, and Mediterranean salad.
Tzatziki Sauce
- 1/2 cup greek-style yogurt
- 1 persian cucumber
- 1 large clove of garlic
- 1 tbsp fresh lemon juice
- 1 tsp olive oil
- Salt and pepper
- 1/2 tsp chopped fresh mint
Grate the cucumber, skin and seeds, and all, using the smaller holes on your grater. If the skin doesn't grate perfectly, use a knife to chop any big pieces. Put the grated cucumber into a strainer and press down on it with a paper towel to remove excess moisture. 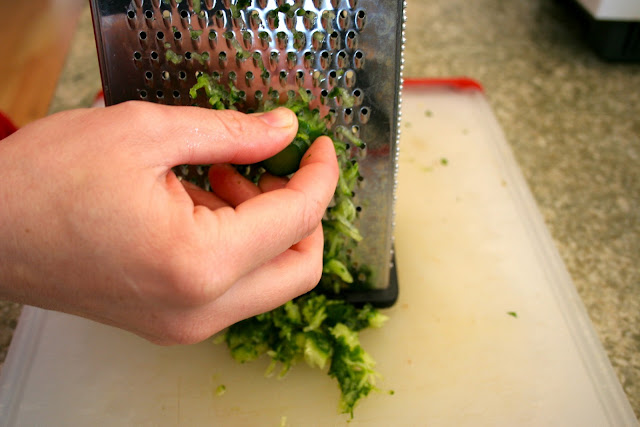 Then, chop and smash the garlic. You really want to get the garlic flavor in here so chop the garlic as usual, then use the side of the knife to smash it into almost a pulp (there's a good tutorial at Food 52). 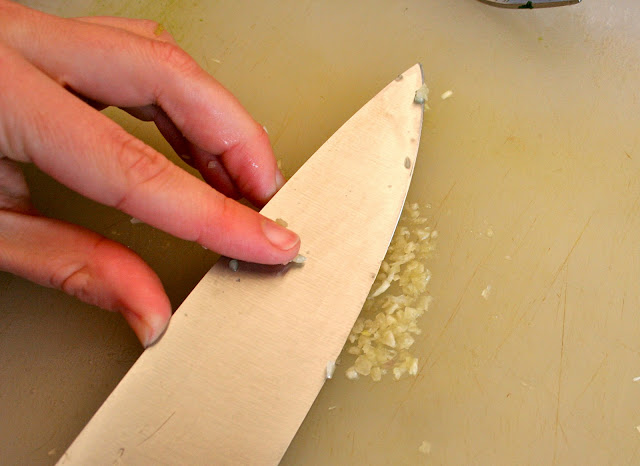 Put the yogurt in a bowl and stir in the grated cucumber, smashed garlic, lemon juice, olive oil, salt, pepper, and mint. If you can, let the tzatziki sit for a while before you eat it so the flavors have time to blend and the sauce gets nice and garlicky. 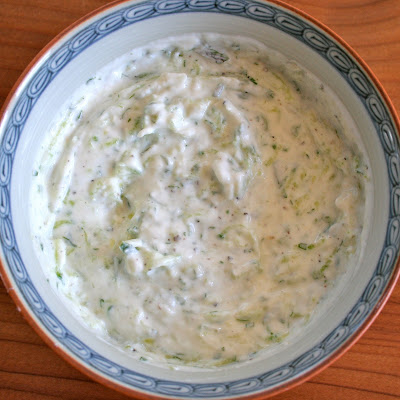 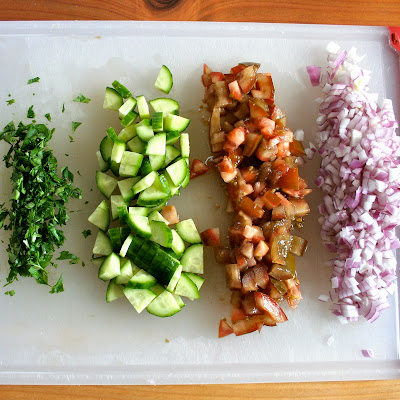 Dice the red onion, the cucumber (keeping the skin and seeds), and the tomato and mix them in a bowl with the parsley. Season with salt and pepper. 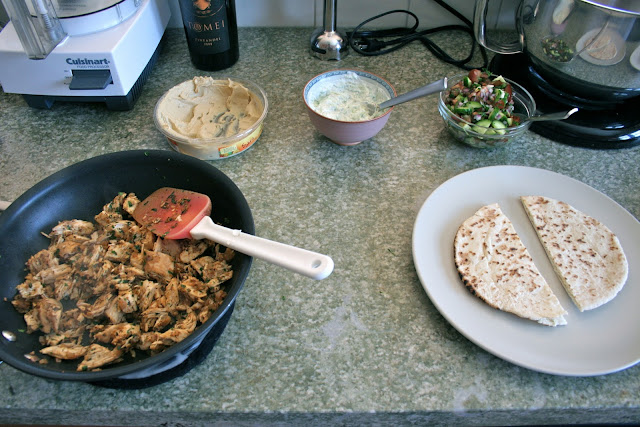 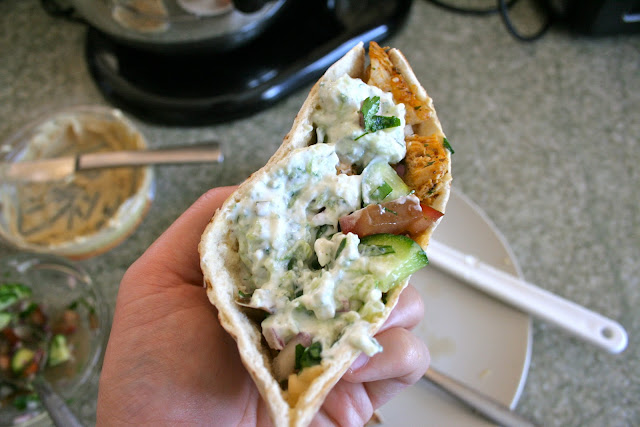 at 10:01 AM
Labels: chicken, greek, pita
Email ThisBlogThis!Share to TwitterShare to FacebookShare to Pinterest