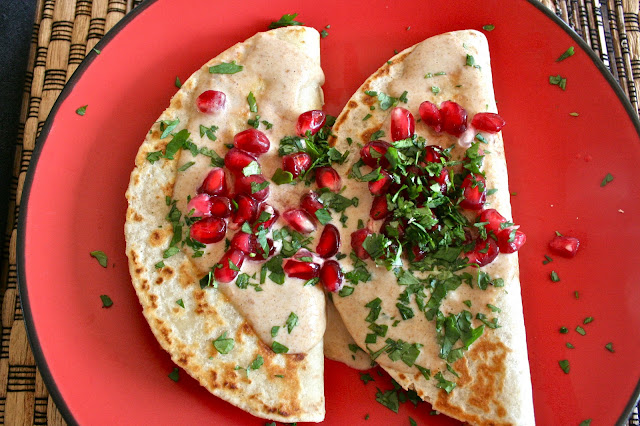 Have we told you about Tacubaya yet? Tacubaya makes us happy, because it's less than a mile from our house and they feed us great California-y Mexican food. We happily eat up beef enchiladas and chicken tacos, but one of the best parts of Tacubaya is that they are really good at using tasty seasonal produce to make outstanding vegetable-based Mexican dishes. They frequently give us inspiration for dishes to make at home. Recently we were blown away by some kabocha squash quesadillas with nogada sauce. They were such a perfect blend of sweet and savory, with hints of cinnamon and "sweet" spices, a little kick of chili pepper and a (mysterious) rich, creamy sauce. They were topped with pomegranate, which gave a little burst of tartness. We immediately realized that we had been missing out on two things: kabocha squash, and nogada sauce.

So, first we have to tell you some of the things we learned. First, we've been very into pomegranates lately (for breakfast with yogurt and granola and clementines!). This is what we learned about pomegranates. You should always wear an apron when removing the seeds, because juice will splatter on your white dry clean only sweater. Also, the little seed-inside-fruit things that you eat are called arils. Arils are "fruit-like structures" but they are not actually a fruit themselves (because they're not ovaries), but are found inside fruits. There's a fun scrabble word for you (it wouldn't get you that many points, but people would be impressed).
Second, about nogada sauce. It's traditionally served as part of the dish chiles en nogada, poblano chiles stuffed with pork picadillo and dried fruit. The dish is served in August and September, specifically around the Mexican Independence Day (September 16). The white sauce, red pomegranates, and green cilantro make for a pretty and patriotic dish. The sauce is made by blending some kind of soft fresh cheese with milk, walnuts, and spices (there are tons of variations).
OK, final lesson and then we're onto the recipe. We'll keep this one short. Kabocha squash. It's Japanese. It's sweet (even sweeter than butternut squash). It's good. You should eat it.
Kabocha Squash Quesadillas (makes 8 small quesadillas - 4 servings)
- 1 kabocha squash
- 1/2 of a medium onion, chopped finely
- 1 clove of garlic, chopped finely
- Oil for cooking
- 1 tsp chili powder
- 1/2 tsp cinnamon
- Pinch of cayenne pepper
- 1/4 tsp onion powder
- Salt and pepper to taste
- 8 5-inch corn tortillas
- 1/2 cup grated pepper jack (or other mild cheese)
- Nogada sauce (see below)
- 1/2 cup pomegranate arils
- 2 tbsp chopped cilantro 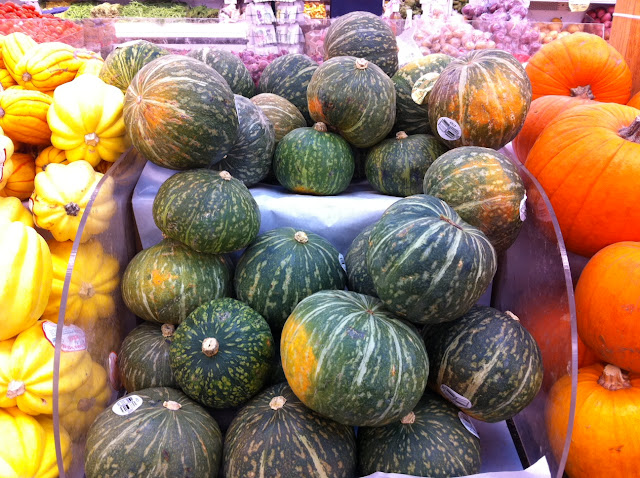 First, peel, seed, and chop the squash (actually our online sources told us that the skin is quite soft and edible, but we took it off - so it's up to you). We found that the best way to get into squash is to cut it in quarters, then scrape out the seeds and guts with either a sharp knife or a vegetable peeler. Cut the squash into approximately 1/2 inch cubes.
Heat some cooking oil in a large skillet over medium-high heat, then add the onions and garlic. Let them cook for a couple of minutes until they're soft, then add the squash (choose a skillet big enough that all the pieces of squash fit comfortably). Stir in the chili powder, cinnamon, cayenne, salt, pepper, and onion powder, and cook the squash until the pieces are tender (but not mushy) - 15 - 20 minutes. If the squash starts to look dry, add a splash of stock (or water, or wine) to the pan. 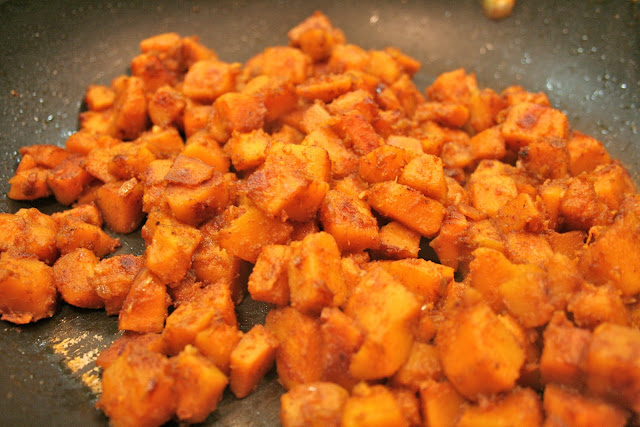 Make the nogada sauce (you can do this ahead of time or, if you have two people cooking, at the same time - see recipe below).
Remove the squash from the skillet and heat some more oil over medium heat in another skillet (or the same one - just use a paper towel to wipe it out a little bit. We've found that we can make the best quesadillas in our stainless steel skillet). If you're making all eight quesadillas, you will probably have to make them in two batches (you can keep the others warm in the oven). Place the tortillas in the skillet and sprinkle the cheese onto them. When the cheese has begun to melt, distribute the squash and fold the tortillas over the squash. Let the quesadillas cook until the bottom turns golden brown, then flip them over to brown the other side (about 3 minutes per side). 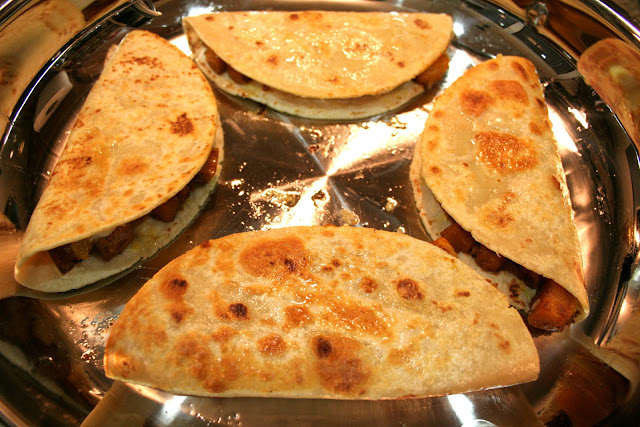 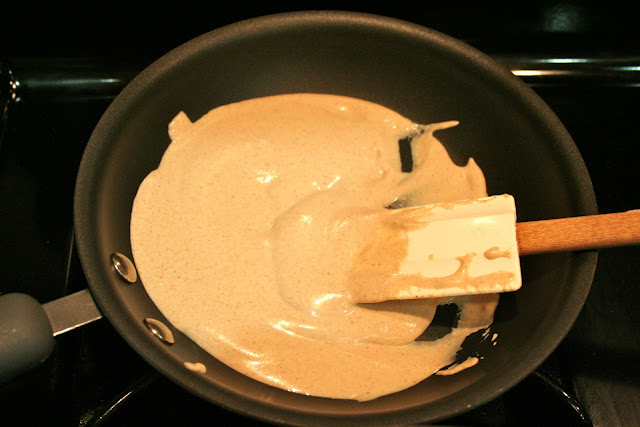 Roast the walnuts by putting them in a 350 degree oven for ten minutes. Combine all ingredients in a blender, and blend until smooth. We didn't want to serve a cold sauce on our hot quesadillas, so we warmed it up in a saucepan before serving. 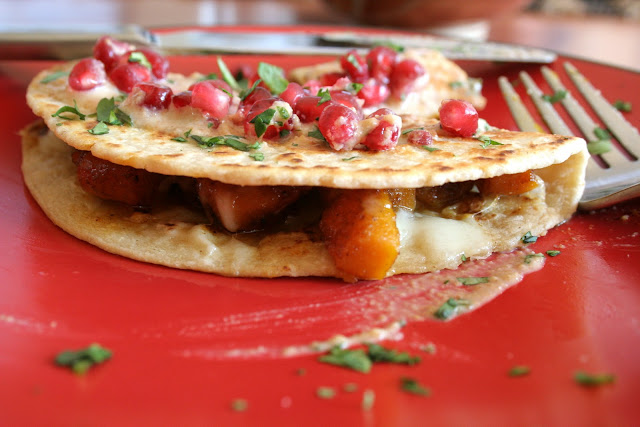