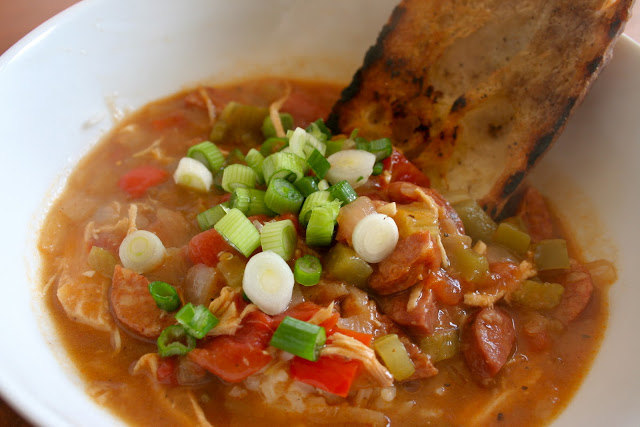 My dear friend Morgan is from New Orleans, and one of the books that she and her husband Scott (also from New Orleans, although they managed to find each other in New York) gave us as a wedding present was Commander's Kitchen, a book of recipes from Commander's Palace Restaurant in New Orleans. We decided to spend this cold and lazy Sunday cooking up a big pot of gumbo.

This was our first dive into Cajun and Creole cuisine, so we had to do a little bit of research on the history and methods of the dish we were making. Gumbo is original to New Orleans and southern Louisiana, and has culinary influences from all over the place, but largely from France and Africa (the word gumbo comes from a Bantu word for okra). Jamie Shannon and Ti Adelaide Martin (of Commander's Kitchen) tell us that gumbo was probably inspired by bouillabaisse, a French fish stew from Marseille. The key difference, though, is that while bouillabaisse is served in a thin broth, gumbo has a thick gravy that blurs the line between soup and stew. Different chefs and styles of gumbo call for different thickener, but it seems that most of them use a roux (a blend of flour and butter or oil cooked together). Okra contains a natural thickener inside the pods (when I first tried to describe it to Michael I called it slimy, but Commander's Kitchen uses the more appealing descriptor of gummy), but our recipe uses filé powder, which is a powder made from dried sassafras leaves that was apparently introduced to Cajun chefs by the Choctaw Indians. We worried that it might be difficult to find, but it was right there in the spice aisle at our local grocery store. 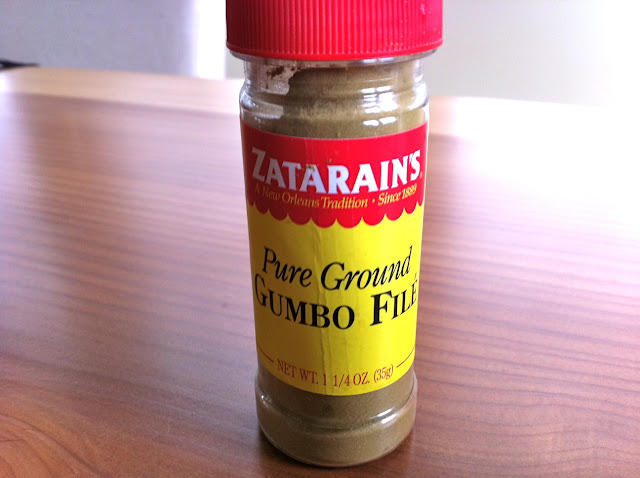 We wouldn't dare mess with the Commander's Kitchen recipe...well, too much, anyway. We did reduce the recipe to about six servings worth, since we don't even have a pot large enough to fit the original recipe. We changed some proportions a little bit and - oh, we added tomatoes (I hope we don't get in trouble with Morgan)! We served it over boiled rice, as recommended, and that was good - you cook the rice at a vigorous boil (rather than a simmer) with more water than needed, drain it, then finish it off in the oven to finish drying it. The grains stay separated a little bit more and have a stronger rice flavor.
Gumbo YaYa (makes about 6 servings)
- 1 large bone-in chicken breast
- Salt and pepper
- 1/3 cup all purpose flour, plus a little extra for dusting
- 1/3 cup vegetable oil
- 1 large onion, diced
- 3 stalks celery, diced
- 1 red bell pepper, diced
- 1 green bell pepper, diced
- 6 cloves garlic, finely chopped
- 1/2 tsp cayenne pepper
- 1 tsp dried oregano
- 1 tsp dried thyme
- 2 bay leaves
- 1 14 oz can of diced tomatoes
- 4 cups of water
- 3/4 pound Andouille sausage (or other smoked sausage), cut in half and sliced
- 1 and 1/2 tsp filé powder
- Hot sauce to taste
- Green onions, for garnish
- Rice, for serving (the recipe calls for boiled rice) 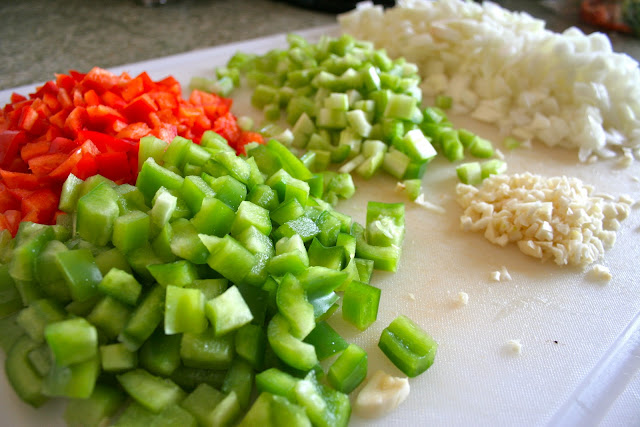 Pat the chicken dry and sprinkle with salt, pepper, and flour. Heat the oil in a large pot over medium high heat, and when it is hot sear the chicken to golden brown (about 3 minutes on each side). Remove the chicken from the pot and set aside.
Next, make the roux. Keeping the heat medium high, gradually stir in the flour and keep stirring until it turns the color of chocolate milk (about 3 - 5 minutes); be careful not to let it burn (if you do you can just start over). 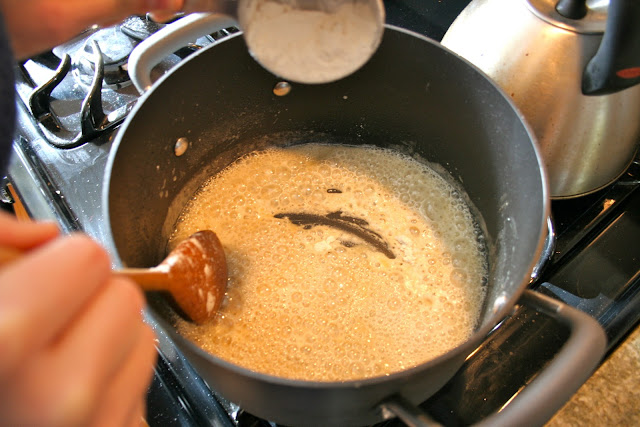 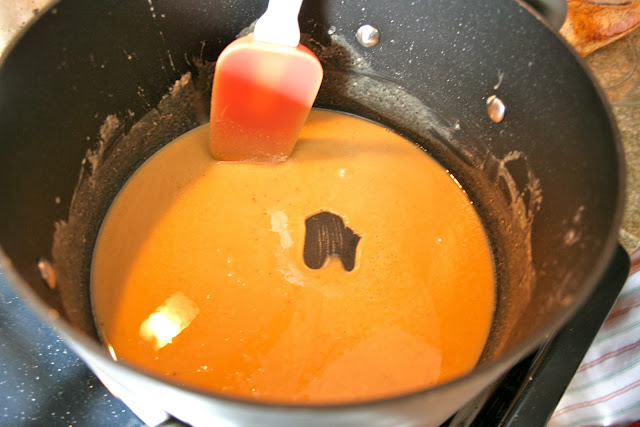 Add the onions, celery, and bell peppers, stirring well so that the vegetables are coated in the roux. Cook for a minute, then add the garlic, cayenne, oregano, thyme, and bay leaves. Slowly pour in the water, stirring the so that the roux does not clump. Add the tomatoes (with their juices), chicken, and sausage, and bring the mixture to a boil.
When the soup has reached a boil turn the heat down a little bit to maintain a constant low simmer. Periodically skim the fat off the top of the soup (hold a flat spoon just under the surface of the liquid and let the fat flow in, then discard). Cook for 2 - 2 and 1/2 hours. The Remove the chicken and pull the meat and skin off the bones (it should come off very easily at this point). Discard the skin and bones and add the chicken back into the pot. 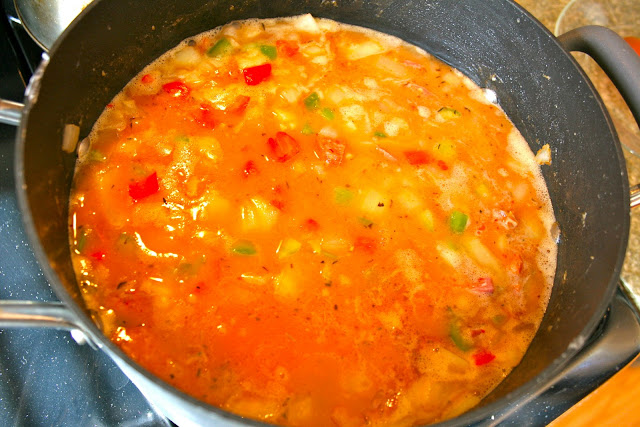 Bring the gumbo back to a boil and stir in the filé powder. Season with salt and pepper, and add hot sauce if desired. Serve over rice and garnish with green onions. 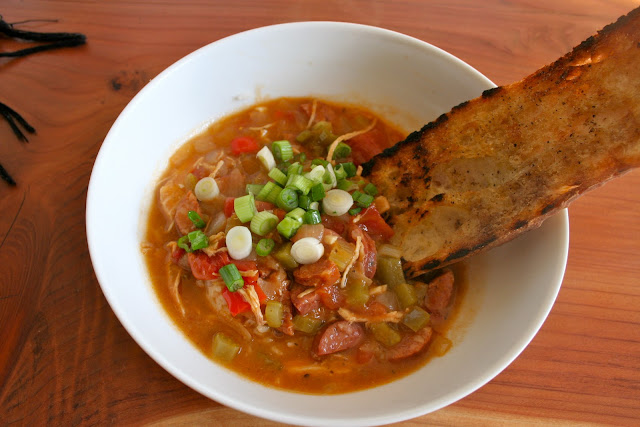 at 11:04 AM
Labels: Cajun, chicken, sausage, soup
Email ThisBlogThis!Share to TwitterShare to FacebookShare to Pinterest