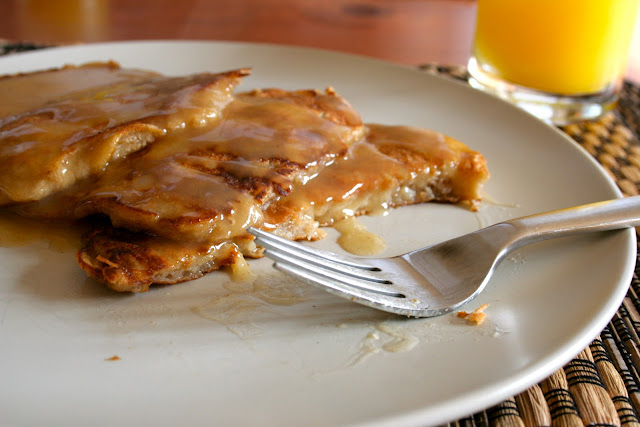 We love pancakes, but we're not crazy about maple syrup.

The artificial stuff is so sweet, and although we're not going to launch into a lecture on the evils of corn syrup and high fructose corn syrup (the two first ingredients in Aunt Jemima's syrup), we will just say that we have a hard time bringing ourselves to pour it all over our pancakes. But to be completely honest we don't love the real stuff either. Pancakes definitely need something on top of them, and we wanted something that would add a little more flavor and complexity, rather than just sweetness, and that would go well with whatever is inside the pancakes, too. On this particular occasion, that was apples.
At the Philo Apple Farm, just down the road from one of our favorite campsites at Hendy Woods State Park up in the Anderson Valley, we have seen apple cider syrup for sale (in season, they have tons of delicious apples, as well as incredible fresh apple juice that everyone should taste at least once in their lives). This sounded like a good idea, and although we didn't buy any last time we were up there, we figured we could make some. We perused some recipes online to get the general idea: apple cider with a little sugar and spices, lemon juice for tartness, and a bit of butter, thickened with cornstarch. Easy enough.
The pancakes themselves are our own creation, with yogurt, apple cider, grated apples, cinnamon, and nutmeg in the batter. The syrup is great because you can adjust the amount of sugar to suit your taste, and add spices and flavors to your liking. Cooking (and of course, eating) them is a great way to get a late start on a weekend morning.
Apple Pancakes (makes 6 5-inch pancakes - serves 2) 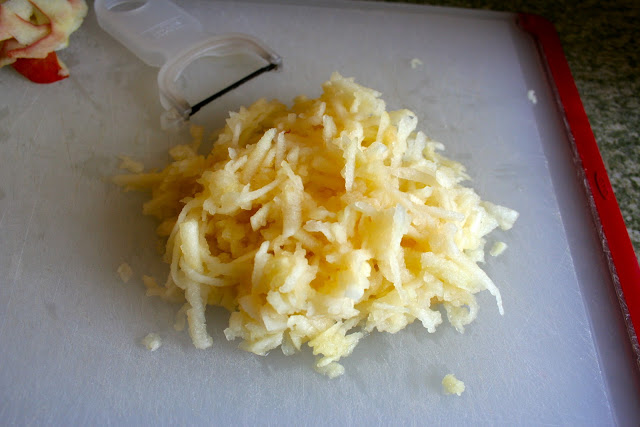 In a large bowl, mix together the flour, sugar, baking soda, baking powder, salt, cinnamon, and nutmeg.
In a separate bowl, whisk together the yogurt and apple cider until well blended. Add the egg, butter, and vanilla and combine.
Pour the liquid ingredients into the dry ingredients and mix until just combined (all pancake recipes we've ever seen have dire warnings not to overmix, so we feel obliged to mention it to, although we have never actually seen the negative consequences). Fold the grated apple into the batter.
Preheat the oven to 250 degrees and melt some butter in a large skillet over medium heat. When the skillet is hot, form pancakes using about 1/4 cup of batter. When you see bubbles forming on the top side and the bottom side is golden brown, flip the pancake and brown the other side. Remove the pancakes to an oven proof plate and put them in the oven to keep them warm while you cook the rest of the batter. 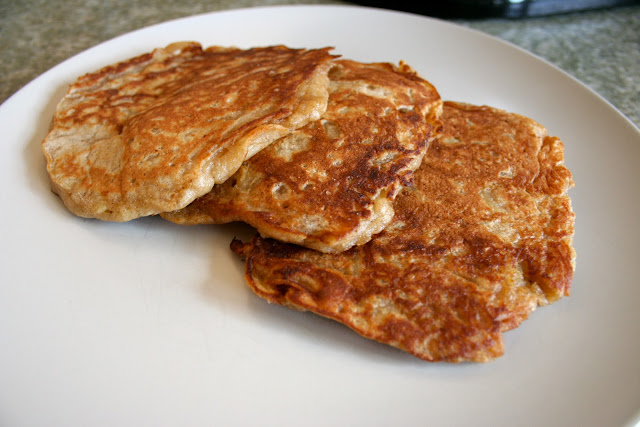 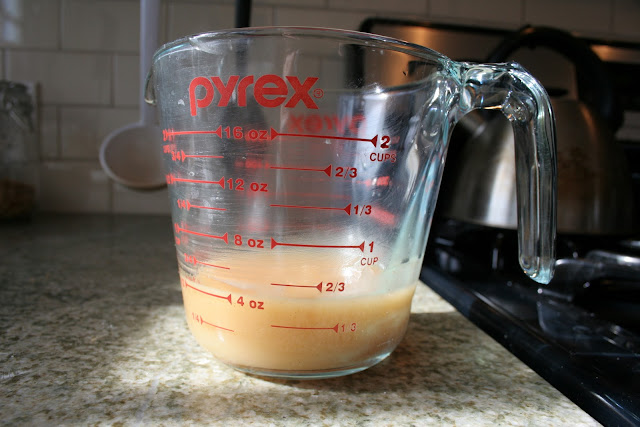 Combine the apple cider, lemon juice, cornstarch, sugar, cinnamon, and salt in a small saucepan over medium-high heat. Whisk together and bring the mixture to a boil. When it has boiled and thickened, stir in the butter (this whole process is very quick - it should take no more than 5 minutes). 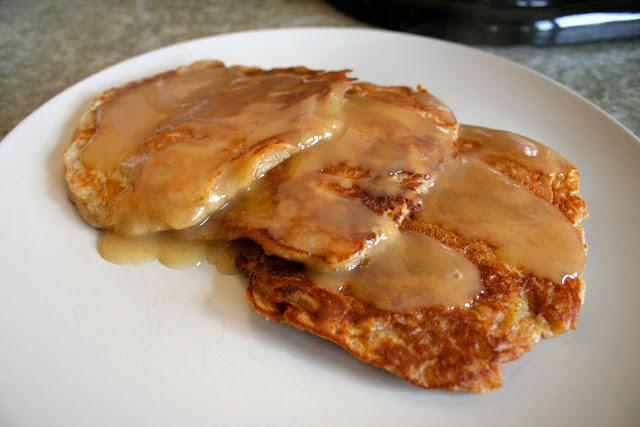