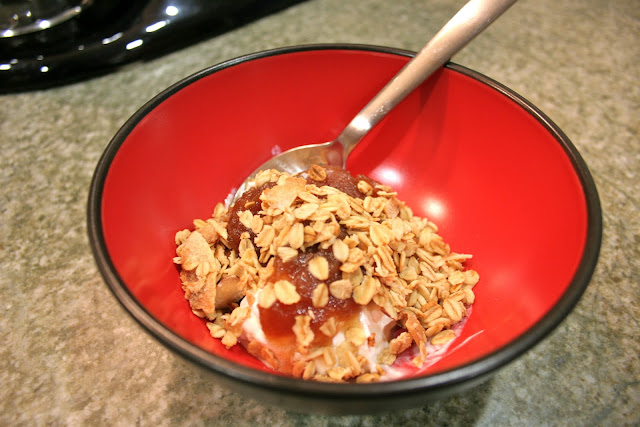 Why, oh why, haven't we made apple butter before? I think in part because for some unknown reason we never really knew what it was. In case anyone else is unclear: it's like apple sauce. But better. It's cooked for much longer (a couple of hours) so that a lot more of the liquid from the fruit evaporates and you're left with a much more intensely apple flavor. Also, the long cooking process caramelizes the sugar in the apples (caramelize is the word that really hooked us here). The other reason we haven't made it may be because we didn't want to commit to the time needed to supervise the cooking of the apple butter. This Sunday was another rainy day, though, and the perfect time for slow cooking something on the stove (we left the house exactly once on Sunday, go to eat delicious homemade bagels at some friends' house. Then we baked a ridiculous chocolate fleur de sel caramel cake for a friend's birthday. Then we made popcorn. It was a good day).

We perused a few recipes to get an idea of the process but took most of our inspiration from 101 Cookbooks Apple Butter with Carolina B. Most apple butter recipes are for a much larger amount, which you can jar and feast on throughout the year. We weren't prepared to deal with sterilizing jars and just wanted a bit to try. We also made a few tweaks in terms of sugar and spices and also found that our cooking process was a bit different. I've been enjoying the apple butter for breakfast with yogurt and granola (pictured above), but it would be delicious on top of gingerbread or even as the base for a fantastic French style apple tart.
Apple Butter (makes about 1 cup)
- 1 pound of apples (this is about 2 medium to large sized apples. We used Pink Ladies)
- About 1 cup of apple cider
- 1/3 cup dark brown or turbinado sugar
- Juice of 1/2 a lemon
- 2 tsp cinnamon
- 1/2 tsp freshly ground nutmeg
- Pinch of salt
Peel the apples and cut them into half inch to an inch cubes (you don't need to be very precise in your cutting, since they'll be pureed anyway). Put them into a medium sized saucepan with just enough apple cider to cover them. Bring the mixture to a simmer and cook until the apples are soft (about 15 minutes). Let them cool for 5 minutes or so. 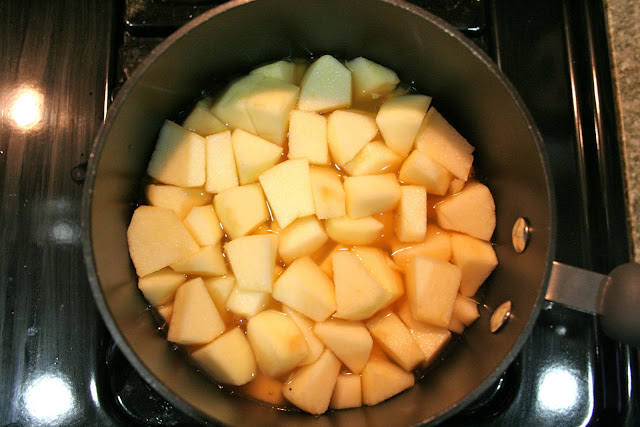 Pour the apples into a blender and puree, then return the mixture to the heat and bring it back to a simmer. Stir in the sugar, lemon juice, cinnamon, nutmeg, and salt. Reduce the heat to medium to keep a low simmer (we recommend keeping the lid on but tilted so that steam can escape; the mixture will bubble and splash quite a bit). 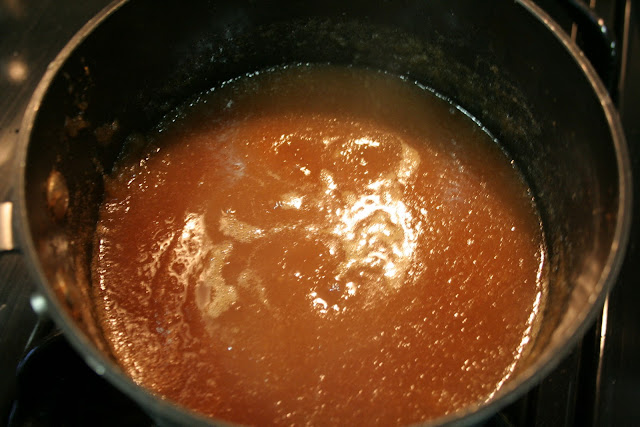 Keep cooking the apples, stirring every now and again to make sure that it's not sticking to the bottom, until the mixture has reduced and thickened a great deal. It will turn a darker color but if you put in as much cinnamon as we did (because we love cinnamon) it will be sort of hard to tell by color. You will know it's done by the thick consistency and the taste - it took us about an hour and a half. 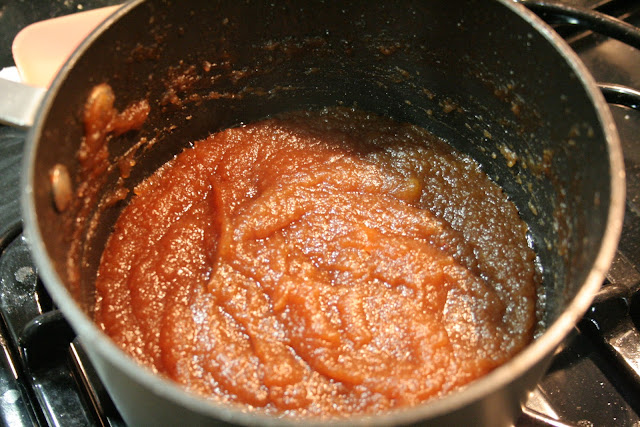 at 5:26 PM
Labels: apple
Email ThisBlogThis!Share to TwitterShare to FacebookShare to Pinterest