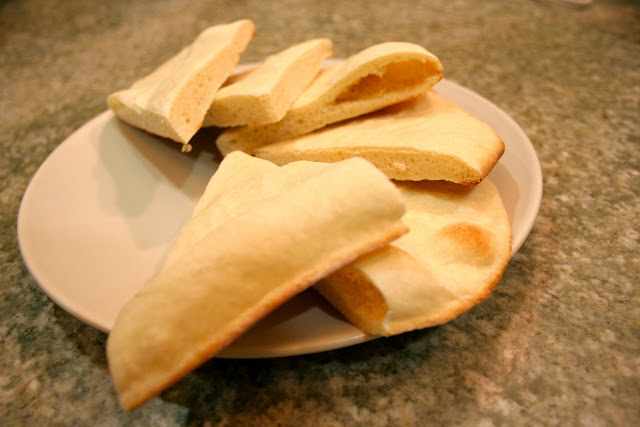 We made pita bread! It was pretty easy and quite good, with a slightly crisp outside and a nice chewy interior. We were having guests over for dinner on a rainy Sunday and had planned to make mujadara for dinner, so to go along with the Middle Eastern theme we were thinking we might go out to get some pita and hummus. Then I remembered seeing a recipe for pita bread in Peter Reinhart's The Bread Baker's Apprentice, so we looked it up and discovered that we had all the ingredients on hand. And not too much later, we were sitting with our guests enjoying freshly baked pita (with store bought hummus because, though we've tried a couple of times, we've never made hummus as good as Sabra hummus. Any suggestions?).
Pita needs to be cooked at a high temperature and, like pizza or focaccia, comes out best if cooked on a stone (the stone absorbs some of the moisture from the dough, preventing sogginess and giving you a nice crisp outside). You can use a pizza stone if you have one, but an excellent substitute is an unglazed quarry tile, which you can buy for about a dollar in the flooring department at Home Depot or any similar place. It would also be very useful to have a pizza peel for transferring the pita onto and off of the tiles, though you could probably use a spatula.
The only problem that we had with the recipe was that the instructions on cooking time in the book are somewhat enigmatic. Peter Reinhart tells us to "bake just until they inflate and form a pocket. Count to 10, then remove the breads from the oven." This made us feel a little anxious - how do we know when the pocket has formed? What happens if we count to ten too slowly? But in the end, it all worked out. Here's what we did:
Pita Bread (makes 3 seven inch pitas)
From The Bread Baker's Apprentice
The recipe is for Lavash Crackers, with a note on modifying it to make pita. To make the crackers, you would roll out the dough thinner, and bake at a lower temperature (350) for a longer amount of time (15 - 20 minutes).
- 1 and 1/2 cups unbleached bread flour
- 1/2 tsp salt
- 1 tsp instant (also called quick rise) yeast
- 1 tbsp honey
- 1 tbsp vegetable oil
- 1/2 cup water at room temperature
- Sesame seeds, if desired
In a mixing bowl, combine flour, salt, yeast, honey, vegetable oil, and water, and mix until you have something resembling a ball of dough (it's okay if not everything is fully combined). Lightly flour a countertop or other work surface and put the dough on the surface. Knead for about 10 minutes, until the dough feels firm and stretchy (the book recommends kneading by hand rather than by machine, since it's a fairly stiff dough). It should also pass the "windowpane test" - if you pull off a small piece of dough, you should be able to gently stretch and knead it so that it is thin enough to be transparent (this shows that the gluten has been activated; if not, your dough will just snap when you stretch it). 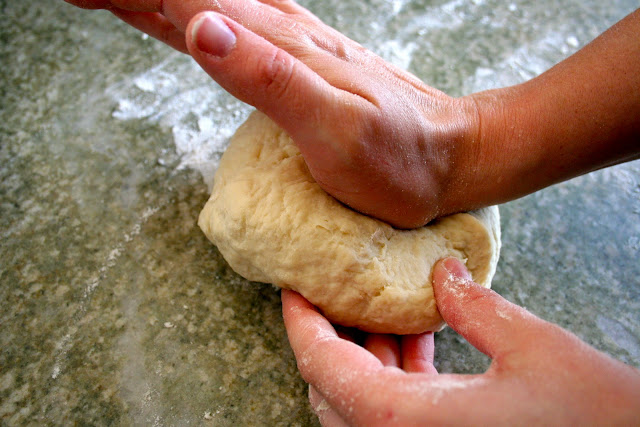 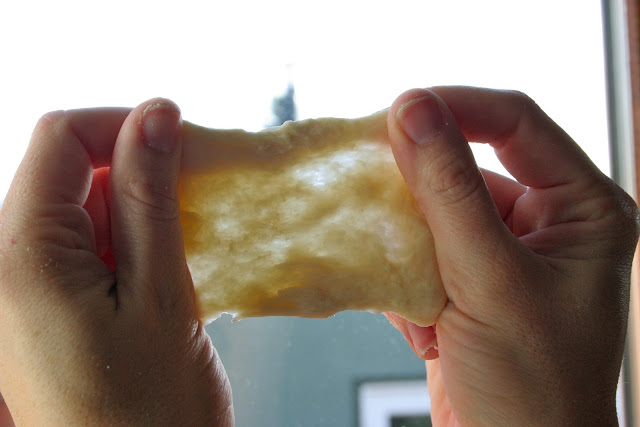 Lightly oil a large boll and roll your dough around in it, coating it with oil. Cover the bowl loosely with plastic wrap and let the dough ferment at room temperature for about an hour and a half, or until it doubles in size. 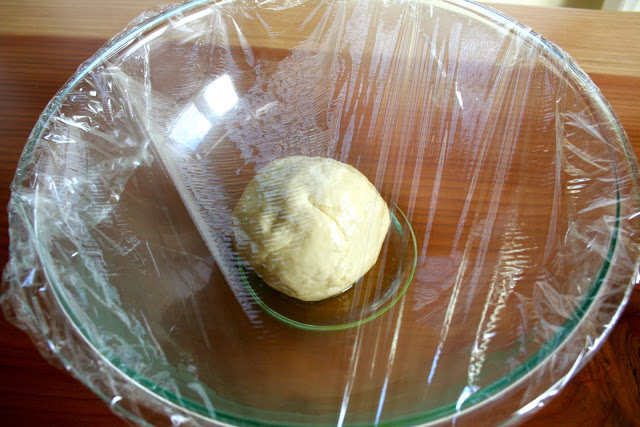 When you're ready to bake, make sure to let the oven preheat with the pizza stone or tiles inside. Heat the oven to 500 degrees.
Lightly flour your working surface and roll a piece of dough out to slightly less than a quarter inch thick (we made two eight inch pitas and one smaller one; it would probably work well to divide the dough into three even pieces). 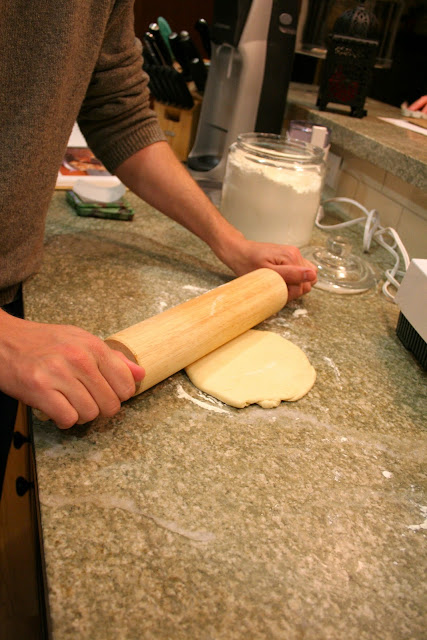 Put sesame seeds on your pizza peel to help the pita slide on and off. Sprinkle more sesame seeds on top, if desired. Gently slide the pita onto the stone and bake until it has puffed up and is ever so slightly browned on top (about 5-7 minutes). Use the peel to remove the pita from the oven and let it cool on a wire rack. 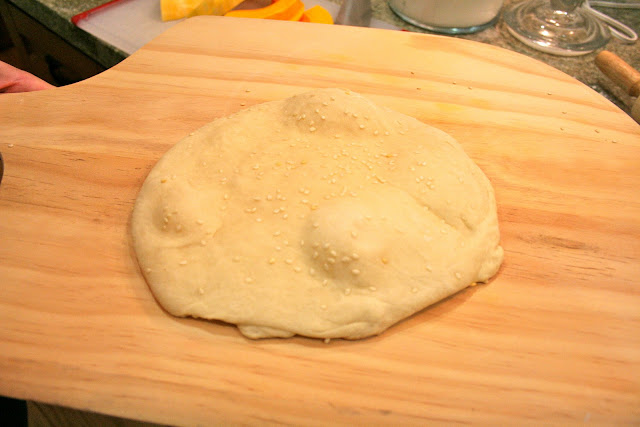 We are still trying to solve the mystery of the pita pocket. Ours came out with a little bit of a slit between the outer crust and the doughy interior on one side, but it wasn't really a pocket. Mr. Reinhart led us to believe that it would magically appear. Wikipedia says that the baking process causes layers of baked bread to separate. My friend Kathryn says Greek pita has no pockets. Any insights?
at 5:37 PM
Labels: bread
Email ThisBlogThis!Share to TwitterShare to FacebookShare to Pinterest