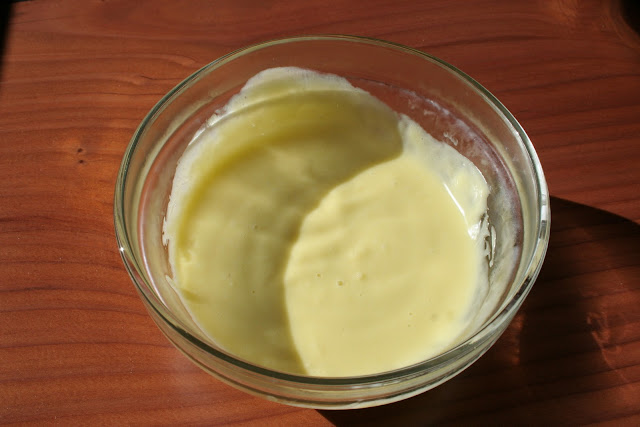 Mayonnaise has always been a bit of an enigmatic condiment. It's white. It comes in a jar. Some people love it. Some people hate it. The brand that Michael and put on our sandwiches when we were growing up on the East Coast is called Hellmann's there, but is Best Foods on the West Coast (really - they both have the blue ribbon on the jar, and if you click on both those links you will see the same video of Bobby Flay). But what is it, exactly, and how is it related to that delicious thing called aioli that fancy restaurants give us with our fancy French fries?
It turns out the answers to these great mayonnaise questions are pretty simple. Best Foods bought Hellmann's in the 1930s but decided to keep the already known names (thank you, Wikipedia). But onto the more important answer - mayonnaise is just egg yolk and olive oil, plus maybe a little lemon juice. Add pounded garlic and you have aioli (thank you, Alice Waters). It's surprisingly easy to make, and the homemade stuff is definitely more flavorful than the jarred stuff, whatever it chooses to call itself. It's also a pretty pale yellow color.
The key here is that you need to add the olive oil to the egg yolk very, very slowly at first. Just a few drops at a time until you can see that the oil and yolk are combining (actually they are making an emulsion - which means that little droplets of oil are being absorbed into the egg yolk and suspended throughout). If you add the oil too quickly, the ingredients won't combine (this happened on our first try).
Mayonnaise/Aioli
Adapted from Alice Waters, The Art of Simple Food
- 1 egg yolk
- 1/4 cup olive oil (you can use up to a cup to make more mayonnaise)
- 1 tsp lemon juice
- Pinch of salt
- 1 clove of garlic (if you want aioli)
Put the egg yolk in a large metal or glass bowl and have the olive oil ready to go in a container that has a spout for easy pouring. Begin whisking the egg yolk as you add the olive oil very slowly, drop by drop (you can whisk by hand but we used a hand mixer on medium speed to save our wrists. Actually, as you can see from the picture, we started with the whisk and then switched to electric mixer). When the mixture begins to thicken and lighten in color (it will not be white like commercial mayonnaise, but will be clearly lighter than the egg yolk by itself), you can add the olive oil a little bit more quickly (in a slow thin stream rather than drops), but continue to whisk vigorously. When all the oil has been added (one egg yolk will hold up to a cup of oil, so you can make more if you want), whisk in the lemon juice (and salt if you are not making aioli). 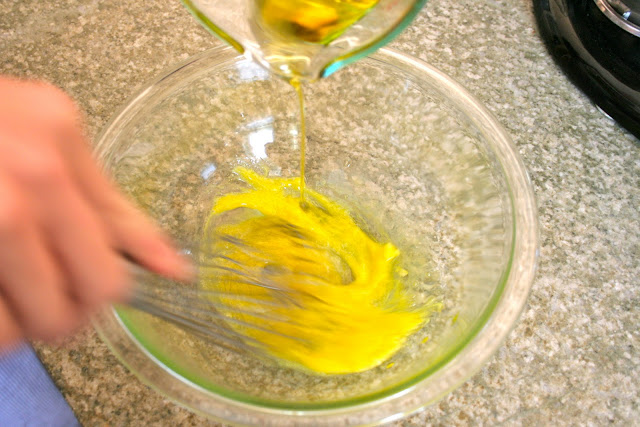 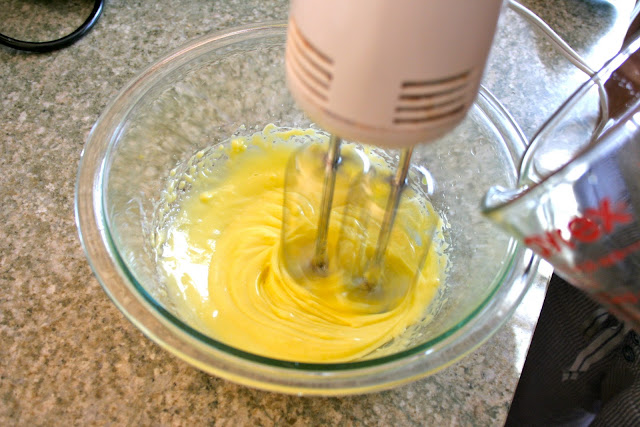 If you want to make aioli, pound the garlic and salt together with a mortar and pestle (this breaks the garlic down into a paste so that it can be distributed evenly in the mayonnaise), then stir it into your mayonnaise. 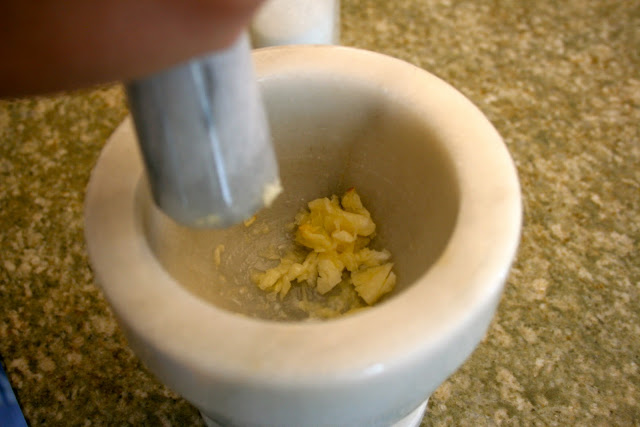 We put ours on delicious pastrami sandwiches with arugula and pepper jack cheese on Acme levain bread (we have gotten good use out of our panini press), then used some more to make Caesar salad dressing - recipe to come soon! We're also thinking of making something like Smitten Kitchen's spicy sweet potato wedges for a Thanksgiving appetizer, served with aioli for dipping. 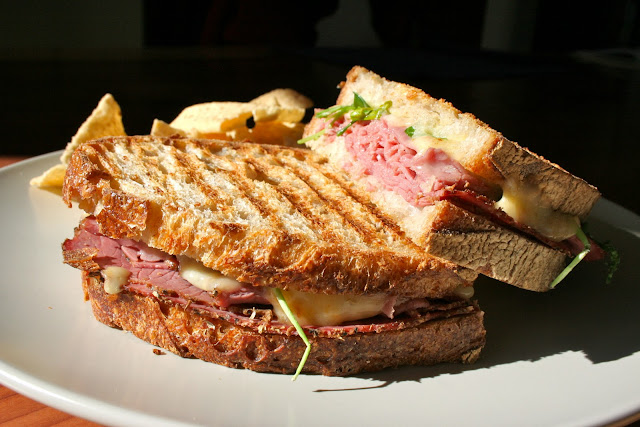 at 10:44 AM
Labels: condiment, egg, garlic
Email ThisBlogThis!Share to TwitterShare to FacebookShare to Pinterest