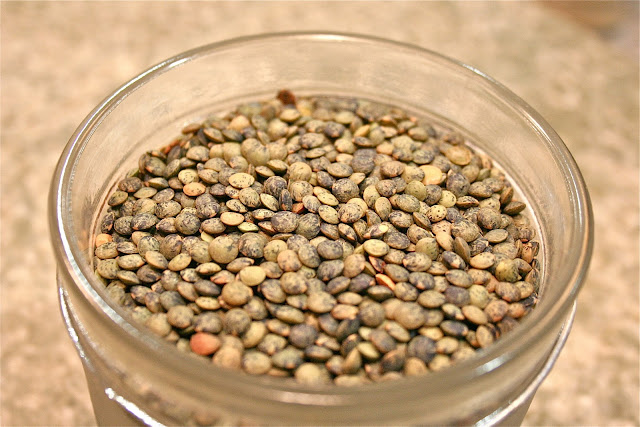 We've learned quite a bit about Andouille sausages recently, starting with the very simple fact that we like them. A lot. They have a wonderful spicy smoky flavor and just a little bit of these tasty sausages adds a whole lot of flavor to a dish. They are a perfect match for hearty, earthy lentil soup; put them in and you will barely need to add any other flavor. The lentils take a bit of time to cook (about an hour) but much less compared to other dried beans, and overall there is very little prep time to this recipe. This soup is a great lunch on a cold fall or winter day, and hearty enough to be served for dinner as well - it would be wonderful paired with a piece of crusty bread or even a grilled cheese sandwich, as we did (we've recently become obsessed with a smoked cheddar that we discovered, so we had a very smoky meal). 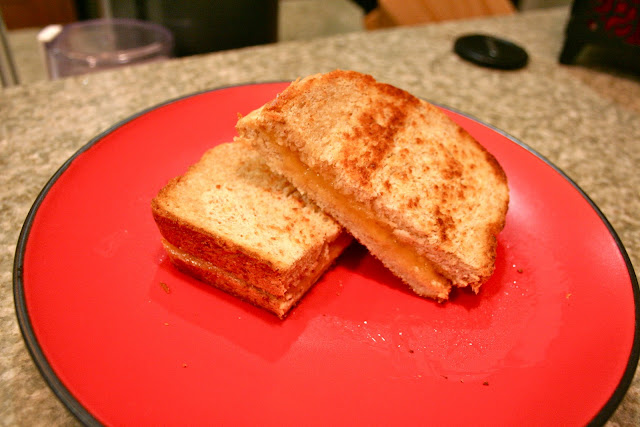 Oh, did you want to know the other things that we learned about Andouille? Well, first of all, it's kind of sort of French, or at the very least seems to have come from France but really took on its current state in Louisiana, and is a big part of cajun cooking. There is an Andouille festival in LaPlace, Louisiana (which we apparently just missed!). According to Wikipedia, it's made with pork, pepper, and garlic, and is smoked over pecan wood and sugarcane. And perhaps the most important thing that we learned (although I already knew this from personal, terrible experience): "though somewhat similar, it is not to be confused with andouillette." Thank you for that advice, Wikipedia, though it comes a little late, because in France I once DID confuse andouille with andouillette, and when my dinner came it was certainly not what I expected. I won't go into detail here, though, because I don't want to ruin your appetite - I will allow the curious to click on the link and learn why, exactly, one should not confuse these two sausages. On to the good stuff...

- 2 tbsp olive oil
- 1 carrot, finely chopped
- 1 medium shallot, finely chopped
- 1 stalk celery, finely chopped
- 1 tsp chopped fresh rosemary
- 1 and 1/3 cups dried French lentils
- 3 and 1/2 cups vegetable or chicken stock
- 1 Andouille sausage (about 1/2 pound), chopped into pieces to your liking
- Salt and black pepper to taste
Heat the olive oil over medium heat in a medium sized saucepan. When the oil is hot, add the carrot, shallot, celery, and rosemary. Cook until fragrant and soft. Add the lentils, stock, and sausage, bring to a simmer, then turn the heat down to low, cover the soup, and cook until the lentils are tender, about one hour. Season with salt and pepper if desired.
This soup would lend itself well to a number of variations - if you want to go veggie, leave out the sausage, but we would recommend adding a bit more seasoning (cayenne pepper would be nice). You could make it a bit Middle Eastern by adding lamb sausage and cumin and curry. You could throw in some dark greens (like kale or chard), chopped tomatoes, or potatoes. It's hard to go wrong with lentil soup! 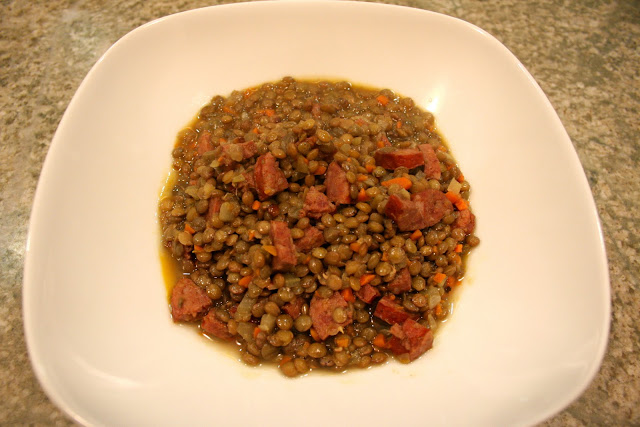 at 11:21 AM
Labels: lentils, sausage, soup
Email ThisBlogThis!Share to TwitterShare to FacebookShare to Pinterest