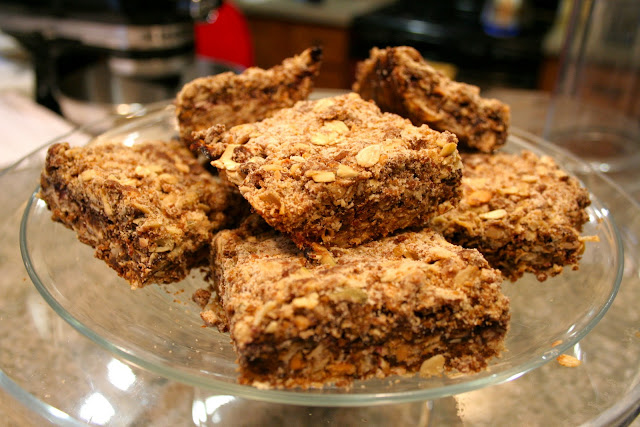 It was rainy this weekend and I was still trying to get over a cold that has managed to last four weeks, so we were pretty well stuck in the house. This is definitely a situation that calls for for baking, but there was one problem: we didn't have any eggs, and the rain and the cold made it unlikely that we were going out in search of them. We had to find something that we could make with the ingredients we had on hand, and once again The Craft of Baking came in very handy with an appealing recipe for raspberry granola bars, which called for butter, flour, sugar, oats (no problem on all of those), pecans (to be replaced with a combination of almonds, cashews, and pumpkin seeds), and raspberry jam (we had some blackberry jam in the fridge).

We made a few adjustments to the recipe (other than the replacements necessitated by what we had in our kitchen). First of all, the original called for a stick and a half of butter. Now, we have no problem with butter, but we just couldn't bring ourselves to put this much into something that we were preparing ourselves, especially since it was supposedly a "breakfast" item. A stick of butter in the croissant I bought from the French bakery? No problem; I didn't see it go in. But a stick and a half in my granola bars? Surely we could make do with less.
We also cut down the sugar a bit, and added a little molasses to deepen the flavor and help hold the dough together (since we had cut out a quarter of the butter). We also added vanilla and cinnamon, because those two things are almost always a good idea. The result: great success! These granola bars are dense, flavorful, and strike a nice balance between sweet and savory. You get a nice sweetness from the jam but the bar part itself is not overly sweet, letting the nut and oat flavors shine through. These are a legitimate, filling, nutritious breakfast food, but also tasty enough to satisfy a sweet tooth for an afternoon snack. The basic recipe could easily be adapted: if you want them a bit sweeter try adding some honey to the molasses/butter mixture; or skip the jam and mix chocolate chips, raisins, or other dried fruit into the dough. Or keep the jam and go all out! Whatever you do, we think you will enjoy these granola bars.
Jammy Granola Bars (makes 9 - 12)
Adapted from The Craft of Baking
- 8 tablespoons butter (1 stick)
- 1/4 cup molasses
- 1 tsp vanilla extract
- 1 cup chopped toasted nuts of your choice
- 1 and 1/2 cups all purpose flour
- 1 and 1/4 cups old-fashioned rolled oats
- 1/4 cup granulated sugar
- 1/4 cup packed dark brown sugar
- 1 tsp kosher salt
- 1/2 tsp baking soda
- 1 tsp cinnamon
- 1/2 cup to 1 cup jam (we used half a cup because that's what we had; the original recipe calls for a cup. Half a cup worked, but you might want more).
Preheat the oven to 350 degrees and line the bottom of an 8 inch square baking pan with parchment paper. Butter the paper and the sides of the pan.
Melt the butter in a small saucepan over medium heat (we browned it but honestly couldn't really taste the brown butter among all the other flavors). Remove from heat and let cool, then stir in the molasses and vanilla. 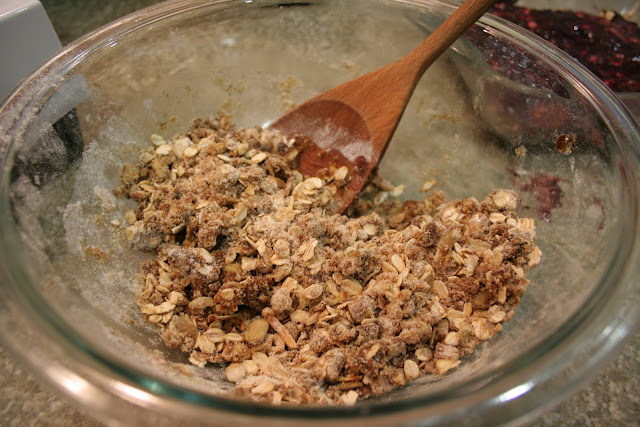 In a large bowl, combine the flour, oats, sugars, salt, baking soda, and nuts. Pour in the butter mixture and mix well. Put about half to two thirds of the dough into the bottom of your baking pan and press down, packing it firmly and distributing it evenly throughout the pan. Spread the jam over the layer of dough, pour the rest of the dough on top of the jam and press down. 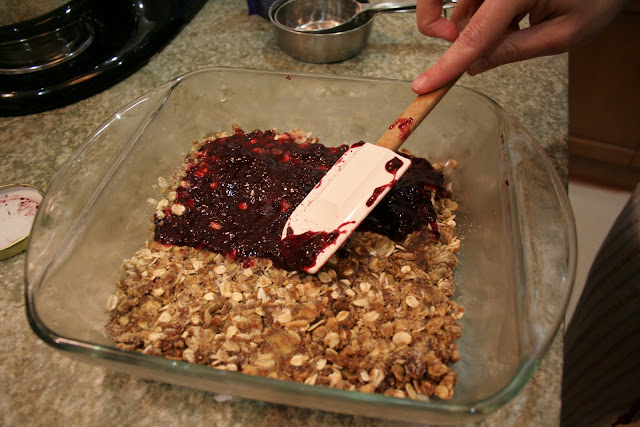 Bake for 45 minutes (we didn't really notice a color change but it was definitely fragrant when done). Remove the pan from the oven and let it cool completely on a wire rack before cutting. Cut into 9 or 12 squares (we did 9 but these bars are quite dense and filling, so 12 would probably be appropriate, depending on your appetite). 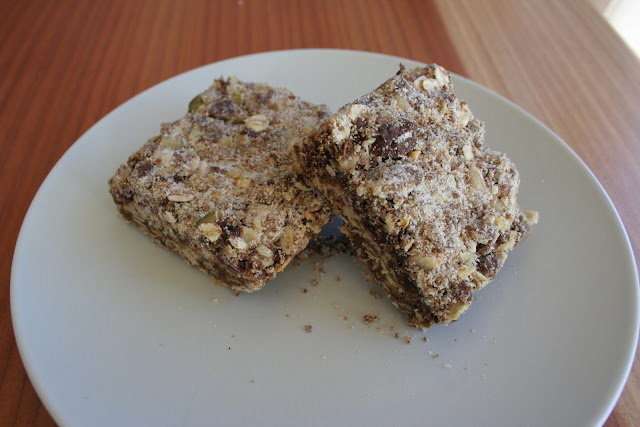