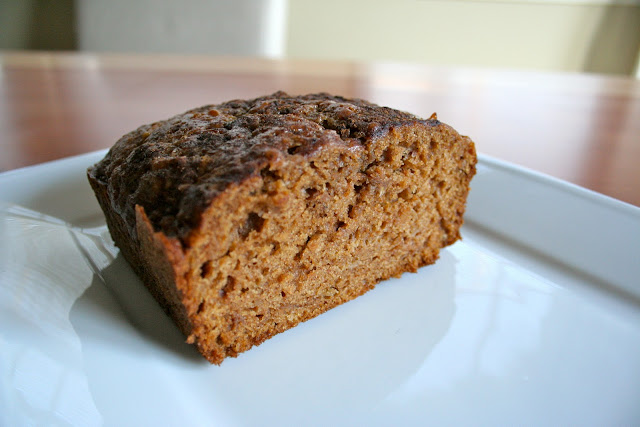 There isn't a whole lot to say about this recipe, other than that baked apples in pretty much any form (crisp, cobbler, tart, sauce, muffin) are delicious, and that we must have forgotten about that when we started mourning the end of summer and berry season. In the past week, we've consumed apple sauce, apple crisp, and are obviously not tired of apples because today we decided to work on perfecting a recipe that caught our eye in The Craft of Baking.
The first time we made this recipe, which was originally for muffins, the result tasted pretty good. We loved how it the grated apples gave it a very moist texture similar to banana bread, and the cider added a nice kick to the flavor. But we found that the batter was a bit too liquid (making the muffins flat and small), too sweet, and lacked the kick from the spices that are the baked apple's best friend. We adjusted the proportions a bit (less liquid, more flour, and more cinnamon, plus ginger and nutmeg) and changed from muffin to loaf (because we thought the muffins would come out too small since they didn't rise much last time, though our new batter was much less liquid and would probably work fine as a muffin). We are very pleased with the result, and happy after all that fall is here.
Apple Cider Bread (makes about 6 servings)
Adapted from The Craft of Baking
- 1 medium granny smith apple (or other tart baking apple)
- 1 and 1/2 cups all purpose flour
- 1 and 1/2 tsp ground cinnamon
- 1 tsp ground ginger
- 1 tsp freshly ground nutmeg
- 3/4 tsp baking soda
- 1/2 tsp salt
- 1/3 cup vegetable oil
- 1/2 cup dark brown sugar
- 1 egg
- 1/4 cup apple cider
- 1/4 cup yogurt (or sour cream)
- 1 tsp vanilla extract
- Pinch of cinnamon and sugar (we used demarara) to sprinkle on top of the loaf 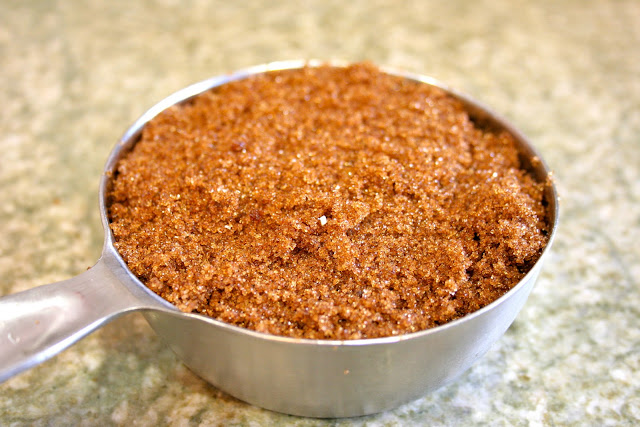 Preheat the oven to 350 degrees. Line the bottom of a standard loaf pan with parchment paper, and butter the sides. Grate the apple using the largest holes on a grater. Put the grated apple in a strainer and give it a gentle squeeze to remove as much of the liquid as possible. 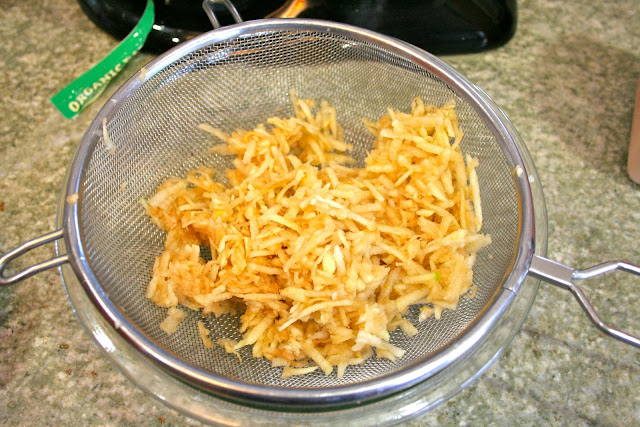 In a large bowl, combine the flour, cinnamon, ginger, nutmeg, baking soda, and salt. In a medium bowl, whisk together the vegetable oil, sugar, egg, apple cider, yogurt, and vanilla. Fold the wet ingredients into the dry until just combined, then fold in the grated apple. Pour the batter into the prepared loaf pan. Bake for about 30 minutes, or until a toothpick or knife inserted into the middle comes out clean. Let the loaf cool in the pan for 20 - 30 minutes before removing it, then let cool completely on a wire rack. 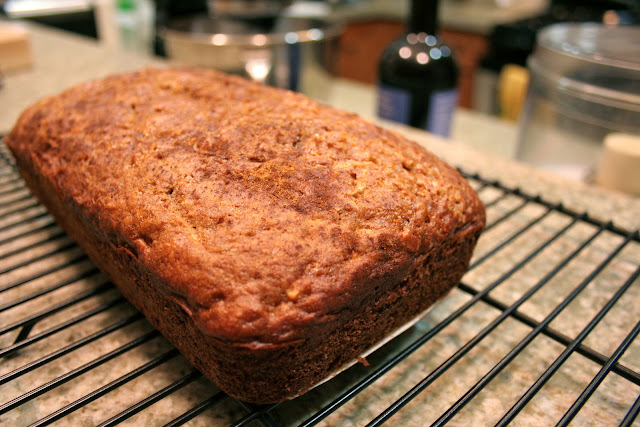