Udon With Bok Choy and Beef 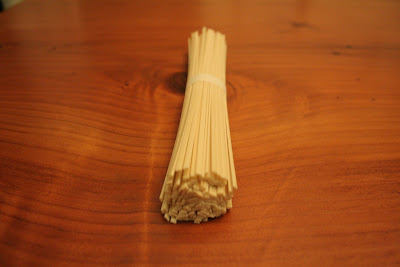 My brother is a trained chef who works as a sommelier in Washington, D.C. I'm happy that he decided to go into wine rather than cooking for his career because, well, it means that he doesn't spend his days cooking, so he still has a desire to do so in his time off. Oh, yeah, and also because he enjoys his work. But back to the selfish reason: when we head east to spend the holidays with our families, my brother cooks Christmas dinner, and last year he also cooked Christmas lunch.

Michael had thought that eating Chinese food on Christmas day was something particular to his people, but Asian food (though not always Chinese) for lunch has become something of a tradition for my family as well. We've gone to Chinatown for dim sum and had pho in suburban Virginia, but the best was probably last year, when my brother made udon. Udon! Noodles! In soup! what a great idea! Fortunately, that same year, he also gave us Takashi Yagihashi's book on noodles so that we could learn to make it ourselves (with some help, via email and text message, from my brother).

It turns out that udon is fairly simple to make. You start by preparing a broth called dashi, which is flavored with kombu (kelp) and dried bonito flakes, which impart that rich savoriness called umami. You add mirin (rice wine) and soy sauce to make udon broth, then noodles, beef, vegetables, or whatever you want in your soup. We found that the biggest challenge might have been tracking down the ingredients, though it turns out that they were not so hard to find, just hard to translate. The Asian foods aisle at the grocery store was like another country, with no English labels, and I had to call Michael and read the Japanese words transliterated into the English alphabet so that he could look them up and find out if they were what we wanted (in case you run into the same problem, katsuobushi is bonito flakes). If you have trouble finding the ingredients in your grocery store, try an Asian specialty store or look online.
Dashi (enough for 2)
Adapted from Takashi's Noodles
- 1 large piece kombu, wiped with a damp towel
- 4 cups water
- 1 cup bonito flakes 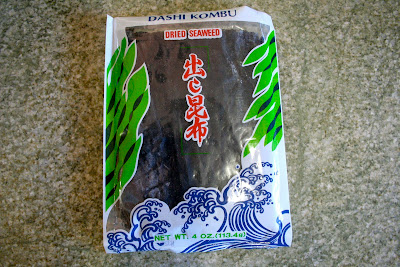 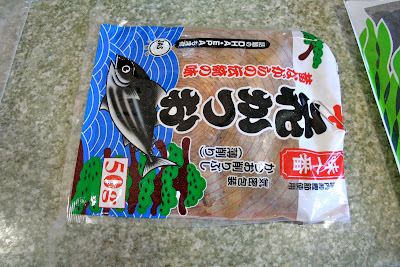 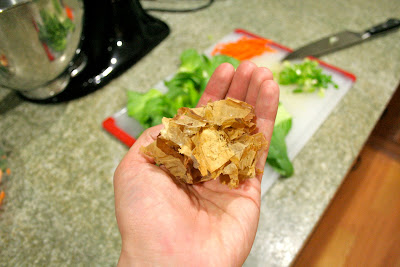 Put the kombu and water in a large pot and let them soak for at least twenty minutes (longer is better, as you want the seaweed to impart as much flavor to the water as possible; you can even soak overnight). Bring the water to a boil, remove the kombu, and turn the burner down to a simmer. Mix in the bonito flakes and simmer for 10 minutes, then strain the liquid to remove the flakes. Now you have dashi, which can be used as a base for any number of Japanese soups, such as soba and ramen.
Udon Broth and Soup (serves 2)
Also Adapted from Takashi's Noodles
- Dashi (see above)
- 2 tbsp mirin
- 2 tbsp soy sauce
- 1 and 1/2 ounces udon noodles (we like the dried kind)
- 1/2 cup dried shiitake mushrooms
- 1/2 lb flank steak or other steak, thinly sliced
- 1 small carrot, julienned
- 1 head baby bok choy, coarsely chopped
- 3-4 green onions, sliced into thin rounds 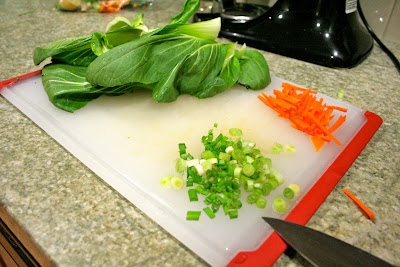 Combine your dashi with the mirin and soy sauce, and bring to a boil. Turn down to a simmer and add the dried mushrooms. Let them simmer until they are tender, about 10 minutes. Meanwhile, bring a pot of water to boil and cook the udon for 4 minutes, or according to your package's directions. Drain the noodles and set them aside until you are ready.
When the mushrooms are ready, drop the carrots, bok choy, and beef into the broth and simmer until the meat is cooked through (about 3 minutes). Divide the noodles among two bowls, then use a slotted spoon to remove the meat and vegetables from the broth and dish them out. Pour the broth over the other ingredients, top with the green onions, and get ready to slurp up your soup (by the way, we just used the chopsticks for the picture.) 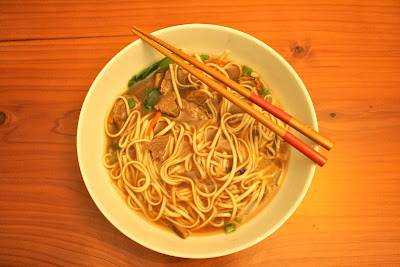