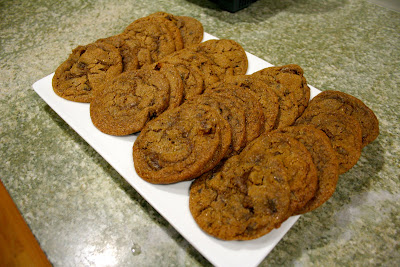 When something as good as toffee chocolate chip cookies exists in the world, it's very difficult to try anything else. For the first twenty-seven years of my life, I don't think that I made any other kind of cookie. Ginger cookies never really crossed my mind, and Michael wasn't even sure he liked ginger, so we might never have discovered these fantastic Ginger Spice Cookies if it weren't for Bakesale Betty. Bakesale Betty, whose name is not really Betty but is in fact Alison Barakat, has a tiny little shop in the Temescal area of Oakland (and a new one in Uptown Oakland), where she makes the most incredible fried chicken sandwiches. Seriously - I could go on about them forever, but I won't, because that's not what we're talking about right now (and plenty of others have already done so). Bakesale Betty also makes fantastic baked goods, and because the line to get these fried chicken sandwiches often snakes out the door and down the sidewalk, she often very kindly sends someone out to offer cookies to people waiting in line. That is how we came to taste one of her big, chewy, moist, spicy ginger cookies.

We've been back to Bakesale Betty for ginger cookies many times, but we also had to try making something similar ourselves. We came across a wonderful recipe from Bon Appétit, tried it out, and have since made it for my faculty meetings and various parties and have never gotten anything but rave reviews. They have a spicy kick, with ginger, cinnamon, cloves, and chunks of candied ginger; they have an almost savory quality to them since the cookie itself is not too sweet, and the savoriness is balanced nicely by a light coating of sugar on the outside. They are incredibly soft and chewy and they are just delicious.
We found this recipe pretty much perfect as is, so have not made any changes to it, but there are a couple of notes. First of all, it calls for a quarter cup of butter plus half a cup of vegetable shortening. We never have vegetable shortening so just use all butter, but we suspect the shortening is intended to help the cookies maintain their shape and not get too flat. Which leads us to the next note - the recipe says to refrigerate the dough for an hour, but longer is better, especially if you use butter - colder dough will keep the cookies from flattening. And the most important note - we don't really think you can mess up this recipe. We've made them in a big rush and let the dough chill for less than an hour and undercooked them a little bit because we were late for a party and you know what? They were kind of flat, and a few fell apart, but it didn't matter because they were still awesome.
Ginger Spice Cookies (makes about two dozen)
from Bon Appétit, March 2000
- 2 cups flour
- 2 and 1/2 teaspoons ground ginger
- 1 tsp ground cinnamon
- 1 tsp ground cloves
- 2 tsp baking soda
- 3/4 tsp salt
- 3/4 cup candied ginger, coarsely chopped
- 1 cup brown sugar
- 1/4 cup butter, softened
- 1/2 cup vegetable shortening (or more butter)
- 1 egg
- 1/4 cup molasses
- Additional sugar (about 1/4 cup) for rolling dough 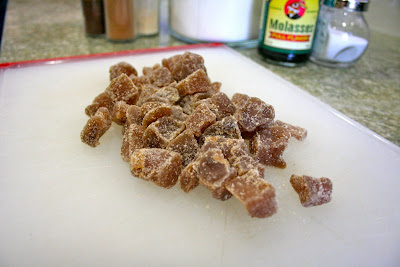 Mix the flour, ginger, cinnamon, cloves, baking soda, and salt together in a medium sized bowl. With an electric mixer, cream the butter and shortening, then add the sugar and beat until fluffy. Blend in the egg and molasses. Add the flour mixture in two parts, beating until combined, then stir in the candied ginger. Refrigerate the dough for at least an hour (preferably more).
When ready to bake, preheat the oven to 350 degrees and line two baking sheets with parchment paper (you can butter them if you don't have parchment). Put the additional sugar (use white or demerara) in a bowl and use your hands to roll dough into balls of about 1-2 inches in diameter. 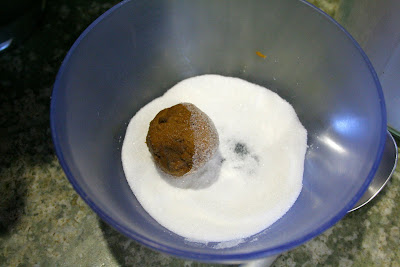 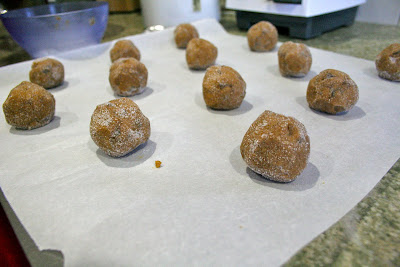 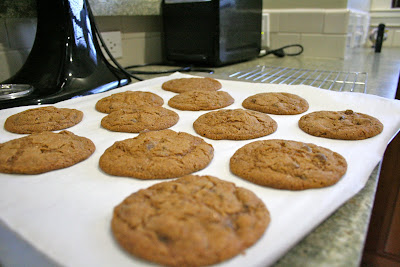