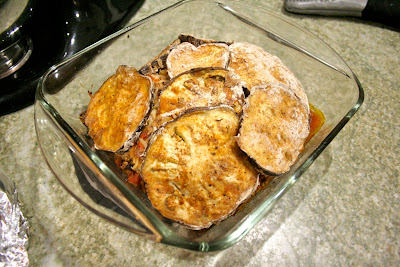 Until fairly recently, neither of us knew very much about moussaka. In my case at least, this may be due to a fact that my dad has revealed to me when I told him about this recipe: he and my mom had a cooking misadventure with moussaka in the early years of their marriage. You see, back then, apparently they did not have such things as Epicurious and Smitten Kitchen and all the wonderful food blogs and they had to get their recipes from books, and these recipes did not come with hundreds of reviews and pictures and comments. They just had Julia Child and a large volume that they called "the Pellaprat," which held an almost sacred status in my house, and they made little notes in pencil on the pages of the cookbooks about what they liked and didn't like. I'm not sure where the moussaka recipe came from, or what the problem with it was (I would love to see the pencil notes on that one), but the way my dad tells it, this moussaka was such a disaster that it became a kind of joke between them, as in, "what do you want for dinner tonight? Moussaka?" (insert sarcasm).

I wish that my parents had had The New Basics Cookbook back then, and that they had tried this eggplant wrapped moussaka, because then they might have had a better relationship with this tasty Greek dish. We had some delicious moussaka at Kokkari in San Francisco, but this recipe is not that kind of moussaka - it doesn't have béchamel or potatoes, and while still hearty and filling, it is not quite as heavy and rich.
The main change we've made to the original recipe was to remove some of the ingredients; it calls for acorn squash and dried apricots, and while we don't have a problem with either of those things, we just felt that there was plenty of stuff already, and good stuff too: ground lamb, onion, almonds, currants, tomatoes, rice, mint, stock, and plenty of spices go into the filling, and are all wrapped up with spiced eggplant. Cool, tangy minted yogurt sauce is the perfect accompaniment.
Eggplant Wrapped Moussaka (serves 3 as a main course)
Adapted from The New Basics Cookbook
- 1 medium eggplant
- 2 tsp cumin
- 2 tsp cinnamon
- 2 tsp ginger
- 2 tsp paprika
- 1/2 tsp cayenne pepper
- 1/3 cup flour
- Salt and pepper to taste
- 1/2 cup milk
- 2 tsp olive oil
- 1/2 of a medium sized onion, coarsely chopped
- 1/4 cup sliced almonds
- 1/2 lb ground lamb
- 1/4 cup dried currants
- 1 tbsp fresh mint, chopped
- 1/3 cup stock
- 1/4 cup cooked white rice
- 1/2 cup chopped tomatoes (we usually use canned)
- Juice of 1/2 a lemon 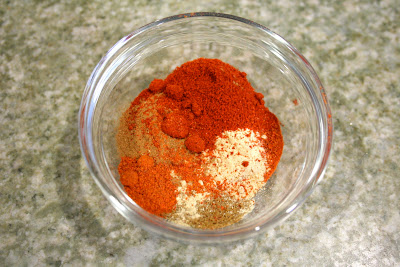 (First of all - don't forget to cook the rice! There are a lot of ingredients here and it's easy to miss that way down there near the bottom the recipe calls for cooked white rice, and even though we know this recipe well we've gotten to the assembly part and realized, oops, we need rice. And then we were hungry for an extra twenty minutes. We do a quarter cup of uncooked rice, which requires half a cup of water to cook).
Preheat the oven to 375 degrees. Slice the eggplant into rounds about 1 centimeter thick. Lightly grease a baking sheet with olive oil. In a small bowl, mix together the cumin, cinnamon, ginger, paprika, and cayenne. Put the flour and half of the spice mixture into a wide, shallow bowl, add some salt and pepper, and mix. Pour the milk into another wide, shallow bowl (in both cases you just need a bowl wide enough to dip the eggplant slices). Dip each eggplant slice into the milk, then into the flour and spice mixture, getting a nice coating and then shaking off the excess. Place the eggplant slices on the baking sheet, put them in the oven, and bake until soft (about 30 minutes). 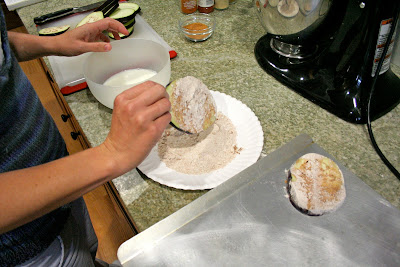 In a large skillet, heat the olive oil over medium heat. Cook the onions and almonds until the almonds start to get toasted and the onions are soft (about 10 minutes). Add the lamb and turn the heat up just a little bit, cooking until the lamb is browned (another 10 minutes). Add the rest of the spice mixture, stir it up, and cook for a minute or two. Then everything else goes in: currants, mint, stock, rice, tomatoes, and lemon juice; mix it all together (you can turn off the heat at this point.) 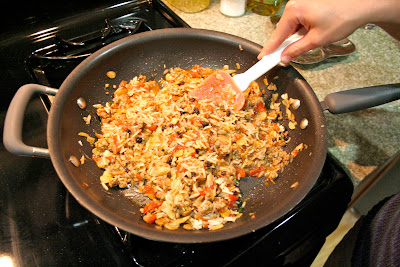 Lightly grease a 9 inch baking dish with olive oil, and line the bottom and sides with the eggplant slices. Pour the lamb mixture in, and then cover with more eggplant slices. Cover the dish with foil and bake for 45 minutes, or until you get really hungry and can't wait any more (the recipe says an hour, but I'm not sure we've ever made it past half an hour, and it always tastes fantastic). Serve with minted yogurt sauce. 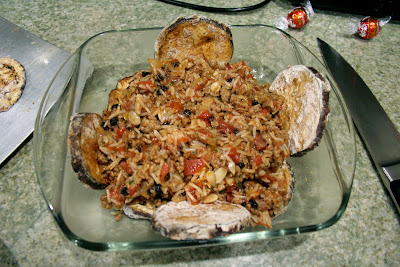 Minted Yogurt Sauce
- 1/2 cup plain greek yogurt (any fat content should work - we use 2 percent)
- 2 tbsp chopped fresh mint
- Juice of 1/2 lemon
- Salt and pepper to taste
Mix all the ingredients together in a small bowl, and serve!
at 8:09 PM
Labels: eggplant, lamb
Email ThisBlogThis!Share to TwitterShare to FacebookShare to Pinterest