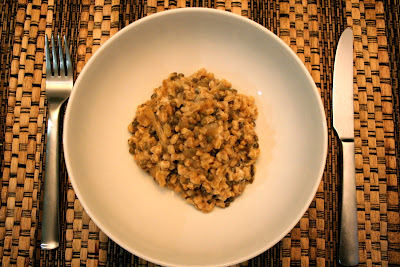 Sunday night is our "free for all" meal night. We usually plan our cooking more carefully during the week and shop for ingredients with something specific in mind. We like to eat out on the weekends. And Sunday we open up the fridge, see what's left from the week, and try to come up with something creative. Or simple. But mainly we go for delicious. This tradition started when we didn't live less than a mile from Berkeley Bowl, our fabulous grocery store, and had no desire to go grocery shopping on Sunday, but we've kept doing it because, well, we kind of like it. It's fun to have a less carefully planned meal and sometimes leads to creative new things that have been incorporated into our regular line-up.
We had a little party last weekend - largely because we wanted to play with some of our new toys: a Wii, a ping-pong table, and - key for the food part - a grill (housewarming present from Michael's parents). We cooked up some tasty lamb burgers and served them with caramelized onions and spiced paprika aioli (a.k.a mayonnaise, mixed with spiced paprika). We got a little carried away with the caramelizing, apparently, because we had a large tub of caramelized onions left over. And we certainly couldn't let those go to waste. So, ingredient number one for Sunday's dinner: caramelized onions.
This got us thinking about a recipe that's been turning up all over the place recently: mujadara. It's basically a pilaf of rice and lentils with caramelized onions and middle eastern spices - you can't go wrong with that, but - you can do better, with the tempting sounding variation we saw posted on Orangette's blog: mujadara with farro. Farro, a flavorful wheat grain, is one of our New Favorite Things, as it's been turning up on menus all over the place (we had a particularly memorable dish with farro, artichokes, and burrata at Redd in Yountville). And we love lentils. Both of those things are staples in our kitchen, and always on hand. So, ingredients two and three are on the list, and now we're cooking. 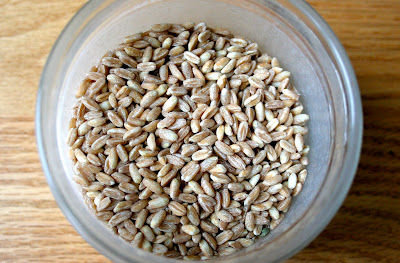 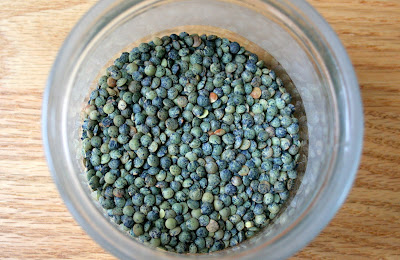 Of course, you need a little flavor - we made ours with smoked paprika, cumin, a dash of cayenne, zatar, salt, and pepper, but you can adjust the seasonings to your taste, and what is in your pantry. 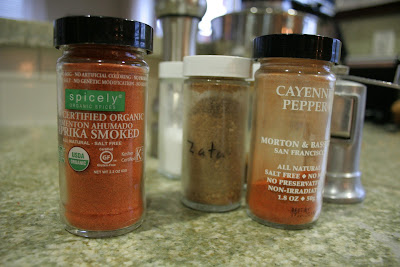 Mujadara with farro (barely adapted from Orangette)
makes 3-4 portions, depending on how hungry you are

- 1 large onion
- olive oil
- 3/4 cup farro
- 1/2 cup french lentils
- 1/2 tsp cumin
- 1 tsp smoked paprika
- 1 tsp zatar
- 1/4 tsp cayenne
- salt and pepper to taste
-generous amount of chèvre
Prepare the grains and beans
First, put the farro in a bowl with two cups or so of water; let it soak for about a half hour (if you don't have time you can do without this step, but it makes the farro cook a little faster and, it seems, come out softer). Drain the farro and put in a pot with 1 and 1/3 cups water and a dash of salt (we've seen a wide variation in water-to-farro ratios in various recipes; this amount has worked for us but you may find something different). Bring the water to a boil, then cover and turn heat to low and let simmer. The farro should be done in about thirty minutes, and the water should be completely absorbed (test the farro to see if it's nice and tender; you can add more water if necessary, and drain if there's extra)
Put the lentils in a pot with 1 and 1/2 cups water. Bring to a boil, then cover and turn down to simmer (as with the farro, there's some disagreement on water ratio. Test the lentils and if they're out of water but still not tender, add more. You want a bit of liquid when they're done to flavor the dish, but not too much).
Prepare the onions
Meanwhile, caramelize the onions. This works best in stainless steel or cast-iron (i.e. non-non-stick), but use what you have. Cut the onions in half width-wise, then slice into thin slices. Heat some olive oil in the pan and, when it's hot, add the onions. Cook over medium heat. Add a pinch salt and pepper. The onions will begin to turn brown; keep stirring them. When the pan is dry and the onions begin to stick, deglaze the pan with a splash of white wine (use the wine to scrape up the flavorful bits that are sticking to the pan and mix them back in with the onions). Keep doing this until your onions are nice, soft, and deep golden (it usually takes us about a half hour).
Put it all together
When everything is ready, stir in the lentils (with a bit of extra lentil-y liquid), farro, and onions together in one of the pots. Add the seasonings and adjust to taste. Stir in a generous amount of chèvre so that it melts and coats everything (the goat cheese gives a nice tang and creaminess to the dish and makes it almost like a risotto).
We had ours with a green salad and some garlic bread. It was delicious, and will definitely be made again - this would be a great winter lunch dish. 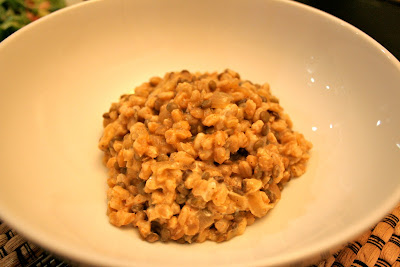