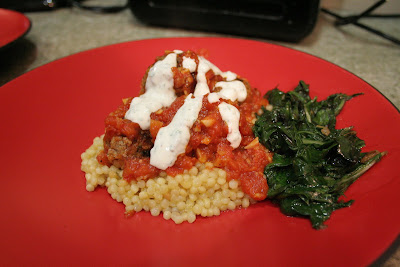 I work at a French bilingual school during the school year, and one of the big advantages (and dangers) of this job is that there is always great food around. The preschool and kindergarten kids have freshly baked baguettes with jam for snack once a week. There was once a near uprising at our January faculty meeting when the teachers found out that there was to be no galette des rois (the usual baker was unavailable). Once a month, the school board meets, and I really have no idea what goes on at these meetings - but I do know that they eat well, because the next day, leftovers appear on the table in the teachers' room. On one of these glorious days, I discovered a bowl of some large round grain looking things, and some meatballs in tomato sauce, and together, they were glorious.
This unexpected bounty stuck in my mind for quite a while. First of all, what was the mysterious large round grain that tasted a lot like pasta? Turns out it was Israeli couscous - one of those things that we should have been eating all along. I started to fantasize about some beautiful meatballs with middle eastern seasonings, served with a spicy tomato sauce over these newfound pearls of deliciousness, topped up with a cool, minty, tangy yogurt sauce. I told Michael about my vision and, with some inspiration from the Eggplant Wrapped Moussaka recipe from The New Basics Cookbook, this is what we came up with. We had ours with a side of swiss chard, sauteed in the drippings of the meatballs.
Middle Eastern Meatballs with Spicy Tomato Sauce and Israeli Couscous (serves 2)
Spicy Tomato Sauce
- 1 lb heirloom tomatoes, or 1/2 can peeled whole tomatoes
- 1 tbsp olive oil
- 2 cloves garlic, chopped
- 1 small shallot, chopped
- 1/2 tsp cayenne pepper
- Salt and pepper to taste
If you are using fresh tomatoes, you can easily peel them by bringing enough water to completely cover the tomatoes to a boil. After cutting off the tops of the tomatoes, put them in a bowl and pour the boiling water over them. Let them sit for about a minute, then drain the hot water and pour cold water over the tomatoes. After a minute, drain the tomatoes, and you will be able to easily peel them with your fingers. Squeeze out the seeds and coarsely chop the tomatoes (chopping applies to canned tomatoes too). 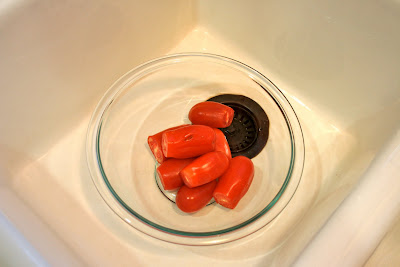 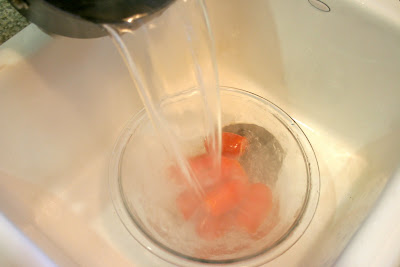 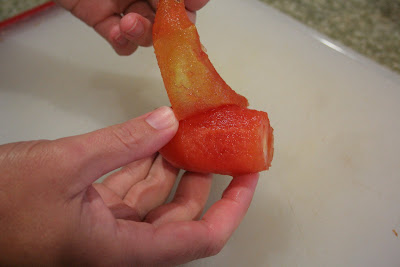 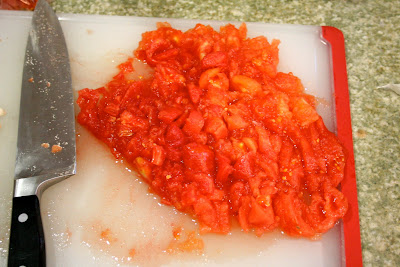 In a medium sized skillet, heat the olive oil over medium heat. Add the shallots and garlic and cook until soft. Add the tomatoes and seasoning. When the sauce begins to boil, turn it down to a simmer and let it cook until some of the liquid has evaporated and the sauce has thickened (about 20 minutes). 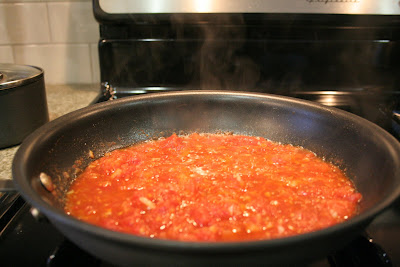 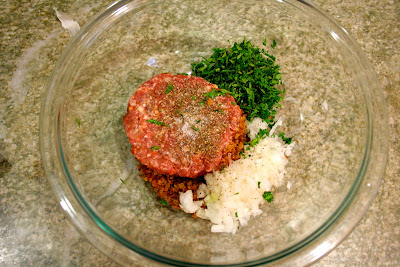 Put all the ingredients in a medium sized bowl. Mix with your hands until well blended. Then form the mixture into meatballs, about an inch and a half in diameter. 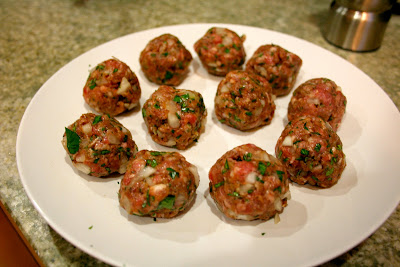 Heat a little bit of olive oil in a large skillet over medium to medium high heat. Add the meatballs and cook, turning frequently, until nice and brown on the outside (about 10 minutes). When they're finished, add them to the tomato sauce and let them simmer together for a few minutes. 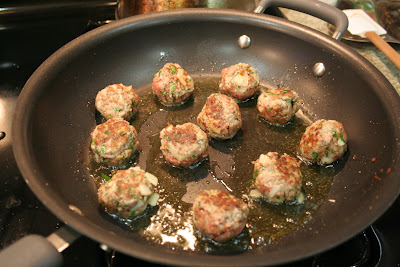 Israeli Couscous
- 1 tsp olive oil
- 1/2 of a small onion, chopped
- 1/2 cup Israeli couscous
- 3/4 cup vegetable stock
Heat the olive oil in a small saucepan and add the onion. When the onion is soft, add the couscous and stir. Add the stock, bring to a boil, and turn the heat down to low. Let the couscous simmer, covered, until the water is absorbed and the couscous is tender (about 10 minutes).
Minted Yogurt Sauce
- 1/3 cup plain greek style yogurt (whole milk or 2%)
- 1 tbsp chopped fresh mint
- Juice of 1/2 lemon
- Salt and black pepper to taste
Mix all the ingredients in a small bowl.


Here you go - basically a Middle Eastern variation of spaghetti and meatballs (kefta is actually the word for a spiced ground meat dish found in many Middle Eastern countries)! 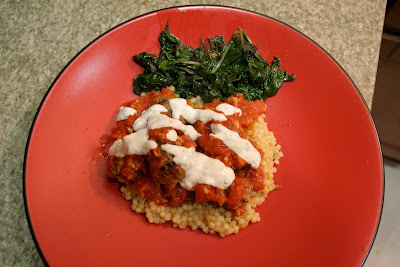 at 9:47 AM
Labels: couscous, kefta, meatballs, middle eastern
Email ThisBlogThis!Share to TwitterShare to FacebookShare to Pinterest